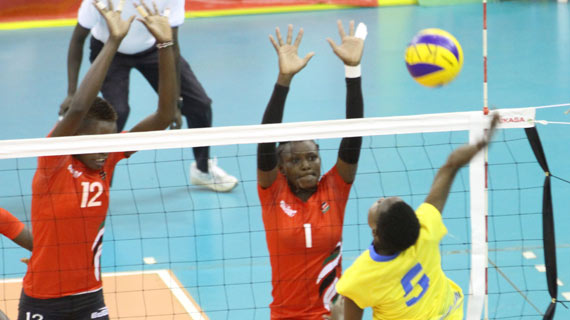 Junior Malkia Strikers attacker Yvvone Wavinya in action for Kenya against Rwanda during the Africa U-23 Championship in Nairobi.

The race for the 2016 Sports Personality of the Year Awards set for January 19 at the Kenyatta International Conference Centre hots up as different sports people who performed well in the previous season expect to bag awards.

Organizers have  released the line up for the boy’s category that includes those who represented Kenya in the junior championships is out.

The Japan-based runner Amos Kirui who won the 3,000m steeplechase race at the World Junior Championships in a time of 8:20.43,stunning pre-race favorite Getnet Wale of Ethiopia, leads a strong field of five nominees for the award.

He will be contesting for the award against Bett Kipyegon, Motorsport’s Jet TuKunen, footballer Joseph Okumu and Ryan Randiek of Tennis.

Kipyegon won the World Junior 800m title in Bydgoszcz, beating Willy Tarbei who had beaten him two years ago and in the process finished the season ranked 12th in the 800m race before he graduated to the senior ranks.

The 10-year old TukKunen has been outstanding in the Motocross scene, securing the MX 65 class title before the last round of the competition.

Lanky footballer Okumu pose a threat in the category too having
risen rapidly in his football career, moving from Kakamega High School to Kenyan Premier League side Chemelil Sugar and joining professional ranks at South African Premier League with top side Free State Stars where he has started in eight of their matches so far.

Randiek  who ranked second in the Africa Boys 14 years and under helped Kenya win the Regional Confederation of African Tennis (CAT) title in January 2016 and is the only Kenyan boy taking part in the 14 years and below CAT African Masters tournament.

She  anchored the team to qualify for their maiden Africa Cup of Nations tournament, however  the fact that she missed the continental showpiece as she was seating for her Form Four exams during the same time.

The upcoming student who steered St.John’s Kaloleni teams to the finals of the East  Africa Secondary School  championships in Eldoret was voted Airtel’s Rising Star’s Most Valuable player.

In the category also is the sprinter Mourine Thomas who had a solid season that saw her claim the fifth spot during the finals of the IAAF World Junior Championships in Bydgoszcz, Poland.

She clocked her personal best of 52.09 in Poland and she is nominated alongside  golfer Kelly Gachaga who brought Naomi Wafula’s dominance in the sport to a halt as she was crowned the new Kenya Amateur Stroke Play champion and also won the Kenya Amateur Match Play Championship.

Tennis player Sneha Kotecha who won a continental title, the CAT 14 and under Masters Tournament, is also in the race and so is volleyball player Yvonne Wavinya who was named the best overall attacker at the Africa Nations Volleyball under-23 championships where Kenya finished second.

This year, the Safaricom  is sponsoring the SOYA Awards  to a tune of Sh16 million and the Ethiopian Athletic Federation president Haile Gebrselassie is expected to grace the event.