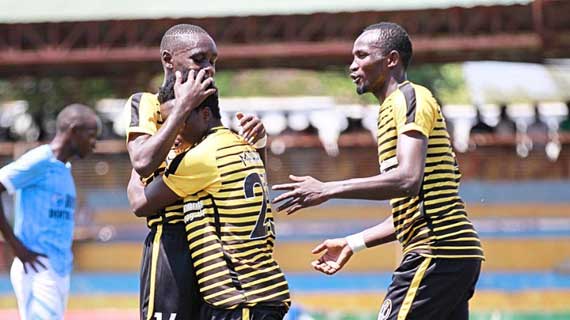 Wazito FC put up a four-star performance to thrash fellow promotion chasing Kisumu All Stars 4-0 at the Moi Stadium in Kisumu to keep their top flight hopes alive as they moved to 58 points top of the National Super League standings.

Mid-season signing Musa Masika struck a perfect brace with Paul Acquah and Teddy Osok scoring in between as Wazito condemned Kisumu to their first home defeat this season.

Masika opened the scoring with a brilliant left foot shot from the edge of the area after a clearance from the All Stars backline fell on his path. He was at the heart of creating the second when his flashy footwork released Amos Asembeka who spread the ball wide for Acquah.

The Ghanaian took a first time shot from inside the box, initially saved but pounced on the spills to scramble the ball home.

The home side were limited in their chances and came close when Nelson Dismas’ freekick was almost turned into his own net by Eugene Ambulwa.

Derrick Onyango should have made it 2-0 when he was picked out with a brilliant cross from Joe Waithira, but the striker connected with his knee and lifted the ball over the bar.

But, Wazito went 2-0 up at the stroke of halftime when Masika completed his brace with a ferocious right foot shot after being put through by Waithira who had skipped over his marker with some good footwork.

In the second half, Wazito came back with more ammunition and Onyango had another chance two minutes from the restart, when a one-two change of passes with Waithira released him inside the box but his shot at the near post was saved.

A defensive mix up with Lloyd Wahome and Ambulwa clashing for the same ball almost gifted All Stars a goal, but Shadrack Omondi’s shot after picking the ball went wide. On the hour mark, another defensive error gifted Omondi, his shit this time round being saved by Stephen Njung’e.

But Wazito ensured victory was safe 13 minutes to time when Osok thumped the ball home, masika once again playing part in the goal spraying the ball wide for Victor Ndinya whose effort was blocked before Osok pounced.

Ndinya should have completed a five star day for Wazito but he missed one on one with the keeper late in the game.