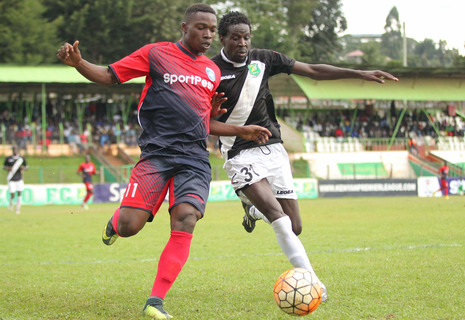 Zoo Kericho will have only themselves to blame after dropping two vital points at home in their 0-0 draw with AFC Leopards on Wednesday evening in Kericho. The home side had great chances to win the game but selfishness and poor finishing cost them.

Dominic Kiprono should have done better with a 17th minute chance when he was set up by Bernard Odhiambo, but the striker’s pale shot was cleared off the line by Moses Mburu with the keeper beaten.

Mike Madoya had a chance seven minutes later when he ran into an Odhiambo through pass, but his shot was wild and wide.

On the half hour mark, Zoo had another chance when Stanislas Akiya broke off on the right before cutting back a cross, but Dennis Chetambe shot wide on his weaker left foot when he had the goal at his mercy.

Three minutes to the break, Zoo had yet another glorious opportunity when Odhiambo floated in an inviting cross from the right, but Madoya’s header unmarked brushed off Salim Abdallah for a corner.

At the start of the second half, Ingwe coach Zapata made changes pulling out Victor Majid for top scorer Whyvonne Isuza in a bid to bolster the attack that had been kept at bay all game.

In the second half, the home side continued to create the better chances in front of goal and just three minutes in, keeper Owade pulled off a brilliant save to tip over a shot from distance by Chetambe.

In the 54th minute, Kiprono should have done better after breaking the offside trap on the right, but his final decision to go at goal himself instead of cutting back for his teammates better placed was futile as he hit the side netting.

Ten minutes later, AFC were forced into another goalline clearance, this time Salim Abdallah rising to head away a freekick from Isaac Kipyegon which had curled beyond Owade.

In the 66th minute, Madoya made an attempt to atone for his earlier misses with a shot from distance which was spilled by Owade.

AFC had two late chances late in the game with Marita and substitute Eugene Mukangula’s shots both being saved by the keeper. AFC had to finish the final few seconds of the game with 10 men after midfielder Marvin Omondi was shown a straight red for an off the ball incident.