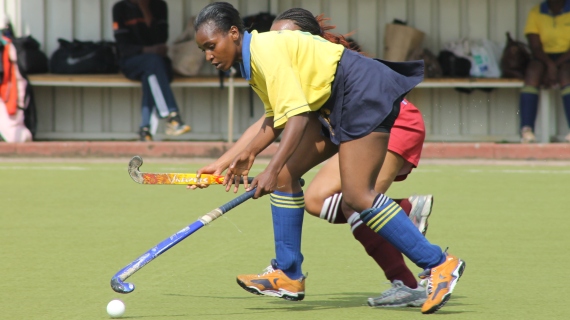 On form Sliders played to a 1-1 all draw against United States International University Africa (USIU-A) in the ongoing Kenya Hockey Union national women's league match at the City Park Stadium on Sunday.

Sliders ,who have been on a roll winning all their previous  three matches  since the beginning of  the second leg,  begun the match as favorites and would have scored in the  5th minute through Anita Agunda, but  she shot wide.

Five minutes later, USIU-A got a penalty corner when Lorraine Nondi was mishandled , of which Sandra Vodoti sounded the boards to put the  James Mwangi coached side in the lead.

Slider's  regrouped to dominate the  game   and. had a dozen of scoring opportunity but were wasteful. After hits and misses, Slider's  Tabitha  Wanjijku pulled one  back  for  Nixon Nyangaga coached side in  the 27th minute  through a field goal  to level  1-1  heading into the breather.

On resumption, Sliders continued with  their dominance and would have scored in 50th minute   through Berly Okwach  but her efforts  were saved by USIU A goal keeper  Laurette Osaso.

The remaining 20 minutes, Sliders forced the students to play in their own half  but their efforts did not bore any  fruits as played to a goalless second half.

In a post match interview, Sliders coach Nyangaga acknowledged that they  squandered many chances,  "We could have bagged three points in today's match , but we were wasteful a couple of times. Our focus now moves to next match, but we will go back to the drawing board and make amends  and be at a better place ahead of the forthcoming match."

His opposite number Mwangi said, " It was a good match. From now on, we will take one match at a time  and we  hope to record positive results in the remaining matches ."