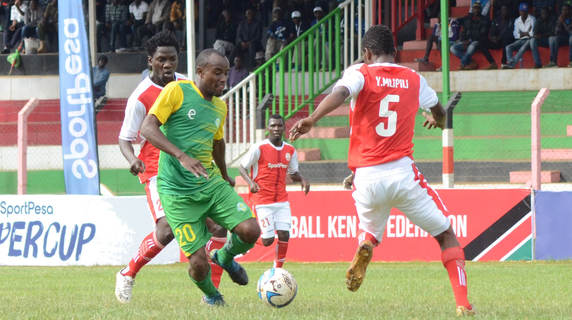 Debutants Kariobangi Sharks failed to progress to the SportPesa Super Cup final after losing 3-2 on post-match penalties to Tanzanian champions Simba SC in the third quarter final of the tournament played on Monday evening at the Afraha Stadium in Nakuru.

After a 0-0 draw in regulation time, the game had to be decided on spot kicks and just like they did in regular time, William Muluya’s men were wasteful, two of their three missed penalties taken haphazardly.

Pascal Ogweno had a foul start for Sharks sending his kick high into the sky with Simba midfielder Haruna Niyonzima making the most by scoring the Tanzanians’ first. Assistant captain Geoffrey Shiveka went up for the second and took a pale shot that was an easy save for Aishi Manula in the Simba goal.

However, his blushes were spared when Simba skipper Hussein Mohammed hit his attempt over the bar. Eric Kipkurui took Sharks level scoring their third kick, but Erasto Nyoni took Simba’s cushion back.

The chasing Sharks scored their fourth through Harrison Mwenda and their hopes were further retained when Paul Bukaba’s powerful kick came off the underside of the bar twice. This took the score to 2-2.

Captain Eric Juma had the easy task of scoring and retaining his side’s hopes but he took another pale effort which was an easy save for Manula. Jonas Mkude stepped up for the decider and made no mistake sending his kick into the roof of the net.

Sharks should have wrapped up the game in regular time but were wasteful especially with Eric Kapaito missing two brilliant opportunities that should have otherwise been converted.

Kapaito was sent through by Mwenda in the 14th minute one on one with the keeper, but he took too much time with the ball when he should have released a shot first time, Mkude racing back to put pressure on him and force a weak shot off the final effort.

Another opportunity presented itself after 20 minutes when Duke Abuya’s spinning cross from the right found him inside the six yard box but the striker missed an attempt to side foot the ball into the net with only the keeper to beat.

Simba had bossed possession in the opening half, passing the ball well but had nothing to show for it. Their closest opportunity was in the 31st minute when Ibrahim Mohammed took a shot from distance which went straight to John Oyemba in the Sharks goal.

There wasn’t much to write home about in the second half apart from a scramble for the ball by Abuya and the Simba backline in the 75th minute which left keeper Manula needing huge bandaging on his left knee.

Simba will now face Kakamega Homeboyz in the semi-final on Thursday.