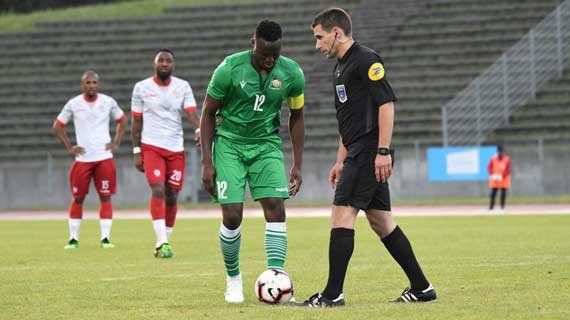 Kenya beat Madagascar 1-0 in a friendly match in Paris, France on Friday night, captain Victor Wanyama converting from the penalty spot to give the side victory in their African Cup of Nations warm up tie.

Under wet and cold conditions at the Stade Robert Bobin in the outskirts of the French capital, Stars made the most of their chance to score, in a game that was hugely dominated by Madagascar.

They had most of the chances especially in a first half where they saw a penalty saved and a shot hit the crossbar with Kenya also almost scoring an own goal via Philemon Otieno. But a much improved Kenya in the second half made it count When Wanyama sent the keeper the wrong way after Ayub Timbe’s cross was cut off by the arms of Norel Jeremy, prompting the referee to give a spot kick.

Changes made by Migne in the second half bringing on Erick Ouma, Michael Olunga and Joseph Okumu for Eric Johannah, John Avire and Musa Mohammed improved Kenya’s performance. Ouma played as an offensive winger with Olunga slotting in attack while Okumu came into defense in place of Musa Mohammed who picked up a muscle strain.

In the first half, it was all Madagascar with the side creating chance after chance to score.

Stars were lucky to be level at 0-0 at the break after Madagascar themselves had a penalty, but keeper Patrick Matasi came to the rescue with a powerful left arm to ensure the boys stood a chance despite a poor first half.

Off a swiftly executed counter, Madagascar were away and Metanire Romain sent Tsilavina Martin through into the box. Matasi came out to cover and in his outstretched arms brought down the lanky forward.

From the resultant penalty, the keeper made amends, leaping to his right and his strong left hand parried Charles Andriamahitsinoro’s penalty onto the crossbar and out.

Madagascar who camped in Kenya’s half for most of the opening 45 minutes created more chances and should have been up by at least two or more goals, were they more clinical in the final third.

In the 22nd minute, Andriamahitsinoro came close when his shot from inside the box was deflected onto the crossbar after Kenya struggled to clear the ball from a cutback on the left.

On the half hour mark, Philemon Otieno almost turned the ball into his own net when he tried to block a cross from Romain with Matasi off his line but luckily for him the ball sailed inches wide.