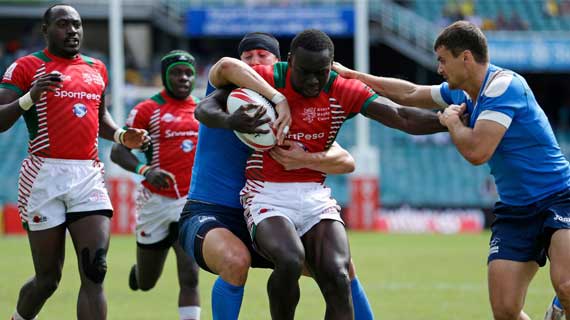 Wanyama , who plays for  English Premiership side Tottenham Hotspurs   was speaking when he visited the rugby sevens team at their camp in London on Friday.

Wanyama also promised to give the team 2000 pounds equivalent to over 200  thousand shillings for the players to share amongst themselves as his motivation gift to the team ahead of the final outing.

Kenya has been drawn in Pool A ahead of the final leg of the 2016/2017 World Rugby Sevens circuit in London .

Kenya will face series champions  South Africa , USA and Wales in the final leg having collected only one point from Paris last weekend .

With 58 points, the Innocent Simiyu squad is currently placed 12th of the IRB World standings.

South Africa were crowned the series champions in Paris last weekend. he Blizboks defeated Scotland 15-5 in the Paris final at the Stade Jean Bouin  to wrap up the series and Paris crowns.