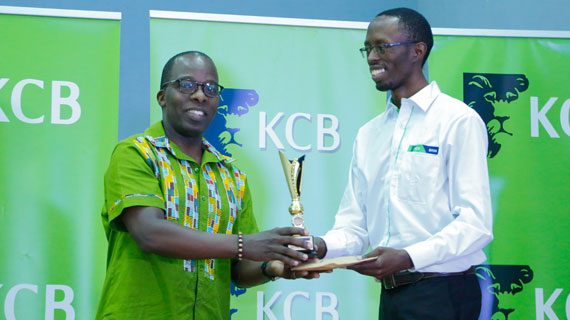 Harold Wanyama and Joyce Nyaruai are the winners of Kenya’s Elite Chess tournament held in Nairobi over the Easter holidays.

Harold Wanyama and Martin Njoroge are the winners of Kenya’s Elite Chess tournament held in Nairobi over the Easter holidays.Wanyama was crowned the winner of the prestige championship while Njoroge walked home with the open title.

The four days tournament sponsored by KCB also saw Joyce Nyaruai lift the women crown while Mwabu Timothy, Lwanga Aguda and Lwanga Odongo were the winners in the U-16, -U12 and U-10 categories.

Wanyama took 29 moves to win against Emojong in the final game after his rook captured Emojong Queen on D7.

In the ladies’ section, Kenya’s Joyce Nyaruai defeated 32 players to emerge victorious with 6.5 points ahead of Uganda’s Women Fide Master Ivy Amoko who finished joint second with Kenya’s Daphne Mwikali. Joyce had been impressive from round one where she defeated East Africa Champion Ivy Amoko during day one action.

KCB Player Martin Njoroge was crowned the Challengers section Champion after a clear 6.5 points ahead of Harmony Odhiambo among other players.

The U 16 was won by Mwabu Timothy of Alliance High School ahead of Subramaniam Suhil who had 5 points. Another major attraction in the junior category was in the under 10 and 12 where siblings Lwanga Odongo and Lwanda Aguda won their respective sections.

Kenya’s Joyce Nyaruai was awarded Kshs.30,000 while the challenger’s winner Martin Njoroge won shs. 50,000. The top six winners in main sections were all rewarded for their efforts as the curtains came down on the open 2017 tournament.