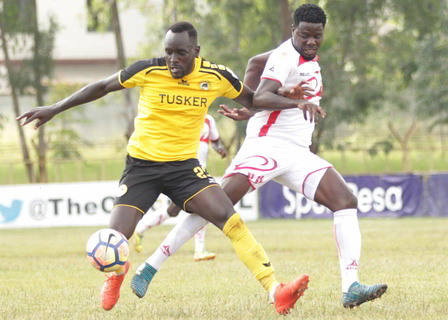 Tusker FC's Eugene Asike (Left) fights for the ball with Allan Wanga,Homeboyz during a match day 17 match at the Ruaraka Stadium. Homeboyz won the match 2-0

Robert Matano is a man under pressure after his team Tusker is seen off by Kakamega Homeboyz in a third consecutive defeat. Tusker FC were hosts as they lost 2-0 at the Ruaraka Stadium on Saturday, afternoon.

Goals from Eston Esiye and former Tusker FC striker, Allan Wanga, handed the Kakamega based Homeboyz their first win against the Brewers in six meetings.

Prior to this match, Kakamega Homeboyz had struggled to pick a point against Kariobangi Sharks on matchday 16, but this proved to play as a motivation to go past Tusker, to pile more pressure to their new tactician, Matano.

Allan Wanga, who was released by the brewers in January showed intent to hurt his former club when he picked up a loose ball that would have given the Homeboyz an early lead, only to be denied by a recovering Eugene Asike, who will have his last line of defence to blame for mistakes.

The game became a two-sided affair when Brian Osumba showed his flair by piling pressure on the visitor's defence from the right. However, the visitors were determined to keep the rhythm on their side and kept Osumba at bay.

It was in the 27th minute, when Eston Esiye, got himself on the score sheet, after driving a ferocious 37-yard freekick that got David Okello off balance to hand Homeboyz the lead. Partly the poor Ruaraka grounds also played an opponent to the team, letting the ball bounce to slip between the already off balance goalkeeper's legs.

Allan Wanga came close again and ensured that his former team loses their sleep for releasing him. He then picked up the second goal of the match to make it 2-0 in the 83rd minute before losing a mouth-watering opportunity a minute before Full-time that could have given him a brace after failing to connect a clear pass from Asiye.

Tusker seemed to control the match after the second half substitution that saw Peter Nzuki being replaced by Jackson Macharia but it was a little too late as the visitors carried the day.

This victory will come as good news for coach Mike Muiruri who is set to leave the club this month.

In another match on matchday 17, Chemell Sugar who are going through troubles of their own lost 1-0 to Sony Sugar at the Chemelil Sports Complex.

Chemelil's problems had begun last weekend where they suffered defeat at the hands of Kakamega Homeboyz.

Chemelil Sugar were reduced to 10 men late in the second half after John Kuol was shown the red card. The goal came in from a curled effort from a free kick taken by Stephen Ouma to hand Awendo based Sony a win in 13 games.

Sony Sugar have now moved one place from the last spot to 17th on 14 points while Chemelil are 11th on 20 points. On the other hand, Tusker are 13th on 19points while Homeboyz are in the top half sitting at position 7 on 24 points.

The Mashemeji Derby which was to be played at Bukhungu Stadium was postponed to a later date.