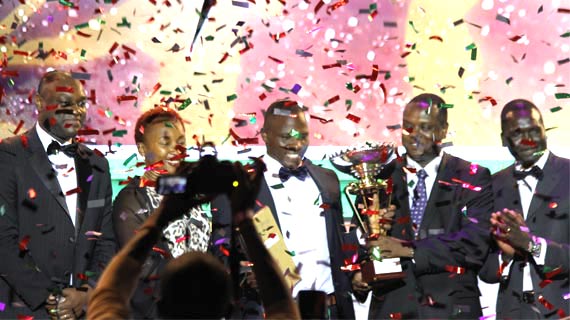 World Javelin champion Julius Yego was the Star of the day on Friday as he was crowned the Sports Personality of the year during the 12th edition of the annual Safaricom SOYA awards ceremony held at the KICC in Nairobi.

The outstanding self trained Yego took home two awards as the best male athlete of the year and the Overall personality of the year  to crown his successful 2015 season that saw him win  the Javelin World Championships in Beijing China , the first gold in a field event for Kenya at the highest stage in the world.

It was however the  national women volleyball team that walked home with the biggest share of the trophies on the night as the national women's teams (A & B) scooped the top two  slots of the  best women team of the year.

National team attacker Mercy Moim who is currently based in Finland came second in the  women athlete of the year that was won by athlete Hyvin Kiyeng..

Most Outstanding Boy of the Year (Schools Category)