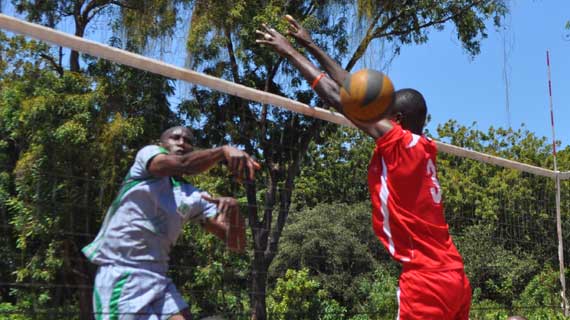 The Kenya National volleyball league action will be held in Kapsabet this weekend with final leg of the league taking place on Friday  as teams fight for a place in the playoffs.

In the men's action KPA Leads the chase  as they are the current  men's league leaders with 31 points.KPA Will face 8th placed Bungoma in their last action  in Kapsabet

With 11 matches this season , new comers Bungoma County  have managed  5 wins  and 6 losses to be ranked 8th.

Defending men's Champions Kenya Prisons are also sure of being in the playoffs and are ranked second with only 1 point behind KPA, 10 wins and 2 loses. Their last match will be against Methodist University.

General Service Unit are in Position 3 with 26 points from 11 matches wins 9 lost 2. They have two matches one against Oserian and the other against fellow soldiers AP Kenya. Followed closely in position 4 are Forest Rangers with 25 points from 12 matches They have only one match against Western Prisons.

In the 5th Position is Coop Bank with 23 points from 12 matches won 8 and lost 4. Their last match will be against Nairobi Water a hard nut to crack.

Coop Bank must beat Nairobi Water 3-0 and wish Forest Rangers loss 3-0 for any hopes in the playoffs and pray so hard that KDF does surprise them.

In other news Kenya Prisons head coach David Lung'aho escaped unhurt when his vehicle was involved in a close shave with a lorry in an accident at Sachangwan. Lung'aho was traveling to Kapsabet alongside Kenya Prisons deputy coach Paul Muthinja.