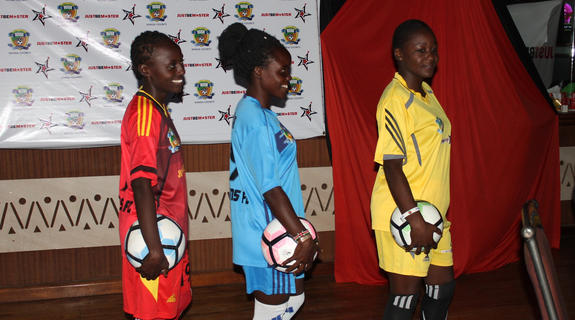 Football Kenya Federation women's Premier League reigning champions Vihiga Queens got a shot in the arm on Saturday with a two-year kit sponsorship.Just Be Master whose one year deal with the Queens expired in 2018 extended their sponsorship for two more seasons.

Though the County government of Vihiga is the main funder of the two-time champions since 2017, it is JBM's name that will appear in the shirts (front). JBM's head of legal department Dancan Obonyo praised the Queens and urged the girls to keep up their good work.

He said: "We are proud of you and hope that this sponsorship will be a motivation for you to keep pushing and creating new dealings for women's football in Kenya,"

Vihiga Queens was founded in 2014 and started out in FKF women's Division One league which they won in 2015 to gain promotion to the premiership football. They carried their impressive form to the top tier league and bossed Zone B in 2016. Their campaign to win the league title was thwarted by Thika Queens of Zone A who beat them in the playoffs that determines the champions. In a repeat of 2016 title playoff, Vihiga Queens turned tables on Thika Queens the following year and retained the trophy in 2018.

Team captain Inez Mango said  the neat and presentable kits will give them a head-start against their opponents since most teams are not kitted. This was all as guests showered the champions with cash and more. Team patron, the Vihiga County assembly speaker Hasna Mudeizi promised to bring more sponsors on board as County Executive for sports Felistus Okumu pledged unwavering support for Queens.

Kweya said:  "Let's not just be having political tournaments, lets have leagues being played in Vihiga. Institute age group football for both genders

"There is a gender imbalance with few women featuring in technical benches and match officiation. Can the county government make it a priority to have training courses in Vihiga," said Kweya.

"Let's not just shine alone. As we get sponsors, other women teams should also get such support. Let this be raising the bar which will keep moving up."