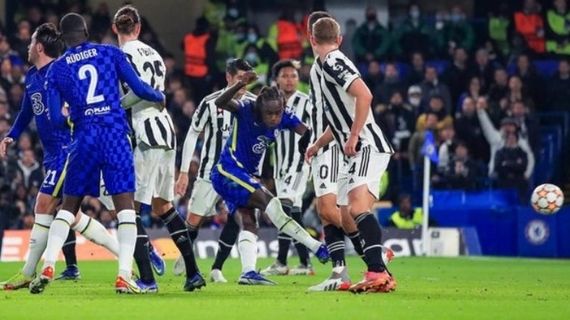 Defending champions Chelsea secured their berth in the UEFA Champions League last 16 with a 4-0 thumping of Juventus in Tuesday action at Stamford Bridge.

Trevoh Chalobah, who was making his first European start for the Blues, scored the opener in this Group H encounter before Reece James controlled a clearance and volleyed across Wojciech Szczesny to give Chelsea the advantage their dominant performance deserved.

A third soon followed with Juventus looking shell-shocked as a short, sharp interchange of passes gave Callum Hudson-Odoi the chance to slot home at the back post.

The scoring was completed when Hakim Ziyech capitalised on a mistake from Juve midfielder Weston McKennie to cross for Timo Werner to tap home in added time.

Ronaldo maintained his record of scoring in every game in this season's competition when he lifted the ball over goalkeeper Geronimo Rulli in the 78th minute, after Fred had dispossessed Etienne Capoue.

Sancho then sealed the victory in injury time, blasting a shot that went in off the underside of the crossbar.

However, United were indebted to goalkeeper David de Gea as he produced two superb one-handed saves, one in each half, to keep out well-struck efforts from Manu Trigueros when it was goalless.

United will progress as group winners with a game to spare after Atalanta could only draw 3-3 with Young Boys in the later game on Tuesday.

The Poland striker gave Bayern - eight points clear of Barcelona in the group - the lead with an overhead kick.

Kingsley Coman, who scored the winner in the 2020 final against Paris St-Germain, slotted home the second.

Denys Harmash scored Kyiv's first goal of this year's tournament but they were unable to find an equaliser.

Bayern were without Joshua Kimmich, Serge Gnabry, Jamal Musiala, Eric-Maxim Choupo-Moting and Michael Cuisance after the five players were in close contact with someone who has tested positive for Covid-19.