U-23 Africa Cup : Egypt recovers to humble Kenya at home 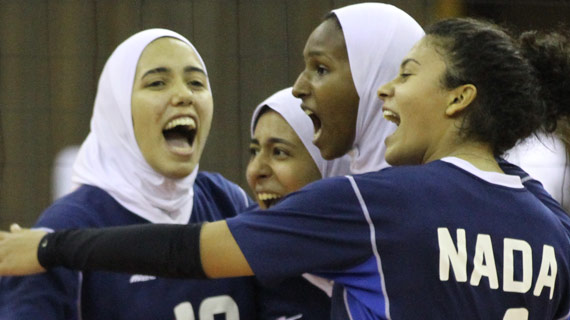 U-23 Africa Cup : Egypt recovers to humble Kenya at home

Egyptian team celebrating a point during their match against Kenya at the U-23 Africa Cup championships.

Kenya  started the match with a positive attitude  and accurate attacking prowess pinning the Egyptians with an early lead. Yvonne Wavinya  and Ann Lowem  were in good form for the hosts as the Kenyan girls took a 25-18 lead at the first set.

A lethal attacking force by Morsy Mariam and Ahmed Aya was destructive for the Kenyan girls who  found themselves chasing a three points gap by the first technical timeout. The lead  powered the Egyptianswith good momentum as they pulled away comfortably to lead 23-15 before Kenyan staged one of the most spirited returns of the match despite losing the second set 23-25.

The match had to be temporarily stopped for over ten minutes due to a leaking roof at the gymnasium coupled by a power outage.

The third and 4th sets were easy  for the Egyptians owing to the many errors committed by the Kenyan who seemed to have lost concentration with a drooped body language.

Wavinya was Kenya's highest score with 11 points followed by Ann Lowem who had 10 points for Kenya.

Kenya will play Senegal on Tuesday before facing Rwanda on Thursday.