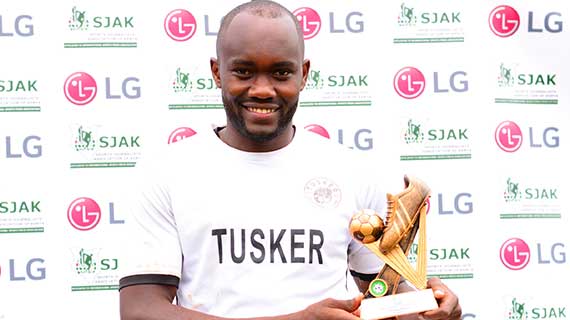 Otieno edged the two other finalists having scored five times alone in November, contributing to 50pc of his current goal tally.

Tusker fc's Timothy Otieno after winning the LG-SJAK player of the month award for the month of November 2019 at Ruaraka grounds on January 23,2020

Otieno edged the two other finalists having scored five times alone in November, contributing to 50pc of his current goal tally.

“I knew the award was not far off because of the kind of run the team has had and credit to my teammates for helping me get this recognition,” an elated Otieno said during his crowning moment at the team’s training grounds in Ruaraka.

Otieno whose target for the first half of KPL was to score ten goals helped himself to half the number in November alone breaching Nzoia Sugar twice then getting on the score sheet each time he came up against KCB, Western Stima and his old club Posta Rangers.

He now wants to score at least eight more goals in the remaining 16 league matches to hit a target set at the beginning of the season.

“That month got me called up to the national team and I want to keep scoring to maintain my stay with Harambee Stars and help Kenya achieve something special,” said Otieno who performance forced the national team selectors to call him up for the regional CECAFA Senior Challenge staged in Kampala, Uganda last year.

“I also aspire to lay my hands on the golden boot. It has been my dream and I’ve tried to win it in the past but it looks feasible this season with the entire team firing on all cylinders. They can really help me win it,” Otieno offered.