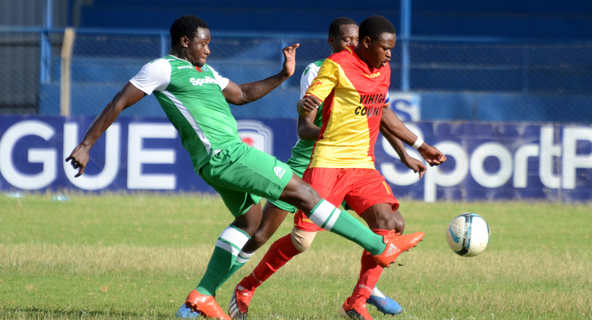 Gor Mahia were crowned Kenyan Premier League champions for the third time in a row, the sixth time in seven years and for a record 18th time on Wednesday evening despite being held to a 1-1 draw by Vihiga United in Machakos.

By halftime, leading 1-0, Gor were already assured of the title with news trickling in from Nairobi that Mathare United, who Gor plays next had held second placed Bandari to a 0-0 draw. The result consequently meant that even if they lost, they would have maintained a gap of seven unassailable points.

Charles Momanyi who had stepped in the place of the injured Joash Onyango in defense made the most of his presence scoring Gor’s goal after 14 minutes before Amos Kigadi equalized for the relegation fighting Nzoia in the second half.

Momanyi rose highest to beat the keeper to a beautiful freekick delivery by Samuel Onyango to break the deadlock.

It was the first effort on target in a cagy encounter with relegation threatened Vihiga doing most of the running while Gor sat back and possessed the ball trying to get the opportune moment to attack.

Gor had to wait until the 35th minute to create any other meaningful effort at goal with Nicholas Kipkurui striing a shot over and wide after being set up by Kenneth Muguna.

A minute on the turn, Vihiga had a dangerous chance at goal when Kigadi rose highest to meet an Alex Imbusia cross from the right, but the header met an equally good save from Peter Odhiambo.

Three minutes to the break, Gor had another chance when Philemon Otieno floated in a beautiful cross from the right landing on Samuel Onyango’s head, but his effort was well saved by the keeper.

In the second half, Vihiga stepped up and created chances. Five minutes after the restart, Kigadi came in to the end of a Victor Ademba freekick, but his effort went just inches over.

Kigadi rose in at the back post to power a header from a Hedmond Mauda freekick into the bottom right of keeper Odhiambo’s goal for Vihiga’s equalizer minutes later.

In the early kick off, Sofapaka’s hopes of pushing for a second place finish were dashed after being held to a 0-0 draw by Chemelil. In Nakuru, Julius Masaba stepped off the bench to strike twice as Kariobangi Sharks came from 3-1 down to draw 3-3 with Ulinzi Stars.