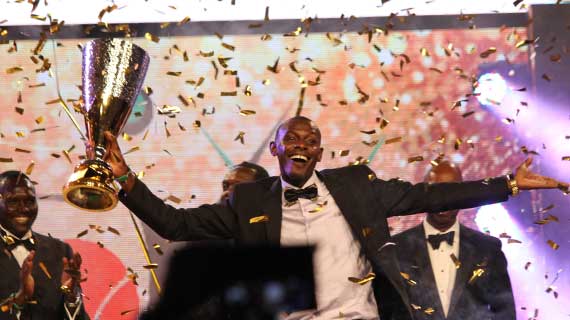 This year's event which enters its thirteenth edition on Thursday (19)  in Nairobi will be graced by Ethiopia’s Athletic Federation boss Haile Gebrselassie who is also a retired athlete.

The country’s successful sports awards  was first initiated  by former world marathon record holder Paul Tergat in the year 2004.However the intervention of the title sponsors Safaricom has seen the event’s status and sponsorship bulge in every edition.

Safaricom officially launched the SOYA in the year 2005 and through its support, several stars in different sporting disciplines have been bred through the urge to post exemplary results over the season with eyes fixed on an award.

The journey began with the Kenya’s paralympian Henry Wanyoike and two-time world marathon champion Catherine Ndereba being crowned as the overall man and woman sports persons of the year in the year 2004.Kenyan National Rugby sevens team and National Volleyball team won the men and women’s sports team of the years respectively.

The following year Benjamin Limo who was the only gold medallist in the Kenya’s contingent to the 2005 world championships in Helsinki won the sportsman of the year award while Ndreba bagged it for the second year running.

Kenya’s team to Chiba Ekiden Relays was crowned the men’s Sports team of the year and the National volleyball team took the women’s category while legendary footballer Joe Kadenge was inducted into the Hall of Fame.

As the year progress, it saw the introduction of different additional categories with the improvement of Kenya’s sportspersons in various sporting disciplines.

The  year 2009 saw the dominance of men athletes in the overall award as rugby player Collins Injera was crowned the Sports Person of the Year for the men’s category and athlete Linet Masai won the women’s title.

From  then athletics has continued dominating the overall category while other sporting disciplines share the spoils in the various categories.

Successful track athlete Ezekiel Kemboi and road queen Edna Kiplagat became the new winners in the year 2013 but Caleb Ndiku and Eunice Sum settled for the men and women overall awards in the year 2014.

The nominees for the 2016 Sports man and woman of the year awards includes David Rudisha, Conseslus Kipruto, Eliud Kipchoge, Collins Injera  among others while women’s lists will see Vivian Cheruiyot and Jemimah  Sumgong going for the top honor.

This year, the overall winner will receive sh1million up from the Sh150,000.

·    Sportsman of the year: Ales Kipchirchir

·    Sportswoman of the year: Janeth Jepkosgei

·    Sportswoman of the year:Pamela Jelimo (athletics)