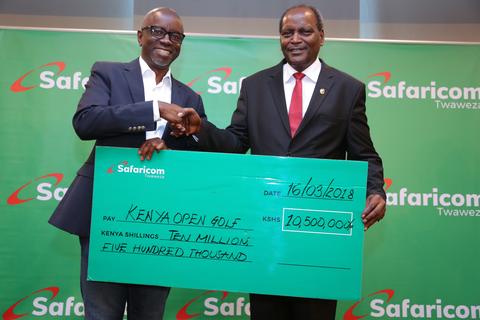 The 2018 edition of the Barclays Kenya Open Golf Tournament received a major boost on two separate occasions on Friday, March 6, 2018. Safaricom announced a KES 10.5 million sponsorship while Multichoice Kenya added a KES 500,000  towards the 50th Edition of the tournament that is scheduled to take place at the Muthaiga Golf Club from Thursday, 22nd to Sunday 25th March 2018. Additionally, the official telecommunications sponsor committed to providing a fully kitted media center and wireless connectivity for the tournament organizers.

Traditionally known as Kenya Open, the tournament has been an event on the European-based Challenge Tour schedule. According to Wikipedia, the tournament first debuted on the Euro Challenge in 1991, falling out shortly in the 1994 event. It was founded in 1967 and has been held at Muthaiga Golf Club every year except 1968, 2004–08, and 2013–16, when it was held at the Karen Country Club. The title has been won by some of the finest golfers, including Seve Ballesteros, Ian Woosnam, Ken Brown and Christy O'Connor Jnr, as well as Trevor Immelman. The most successful player is England's Maurice Bembridge, who recorded three victories between 1968 and 1979.

The 50th edition of the Barclays Kenya Open will involve 156 players. They include 106 players selected on merit through the European Challenge Tour and another 50 chosen by the Kenya Golf Open Golf Limited featuring Kenyan and regional professionals and amateurs. Previous Champions Gary Boyd, Robert Dinwiddie, and Sebastian Soderberg are among the high profile golfers expected to take part.

The Friday double sponsorship is a boost to the risen prize kitty. Being part of the European Challenge Tour, the prize kitty of the tournament has increased to 500,000 Euros equivalent to KES 62.5 million making it the richest tournament to sit on the tour. Barclays Bank has committed Sh82m this year, comprising Sh50m for Barclays Kenya Open sponsorship and Sh32mn that will go towards a six-tournament series which will feature amateur players and junior golfers. Additionally, the tournament will benefit from 100m from the government for the next five years (50m from the Ministry of Sports and 50m from the Tourism Ministry), as announced by Najib Balala during the launch of the 50th Edition of the tournament on Wednesday, March 15, 2018.