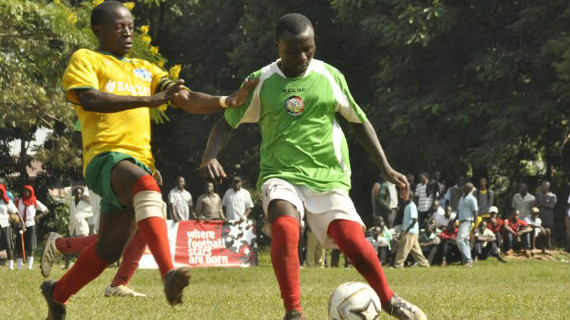 The much hyped Airtel Rising Stars clash pitting soccer giants Kakamega boy’s Green Commandoes and St. Anthony Boys lived to its billing with police having to intervene to restore normalcy as rivalry hit a crescendo.

At stake was a ticket to represent the Nzoia region at the Airtel Rising Stars national finals set for Machakos from June 27th to July 2nd.

The action on the pitch had proceeded well with little to separate the giants until the 75th  minute when Green Commandos defender Eric Ouma scored amid claims that the ball did not cross the line.

Without the luxury of goal line technology to prove or disallow the goal, the center referee awarded the goal much to the dismay of St. Anthony's bench and players who immediately invaded the pitch baying for the referee's blood.

Security officers who threw a cordon on the referee were forced to fire teargas canisters to neutralize the crowds as the match officials were whisked away. The match aborted.

The match will be replayed.