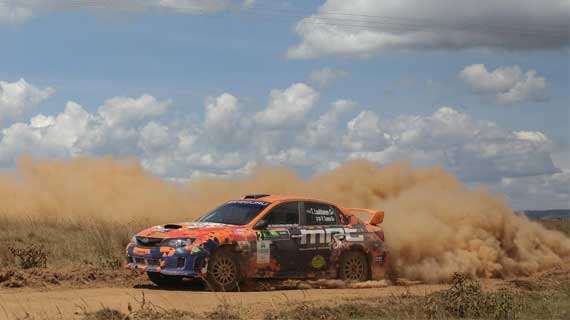 Despite finishing 4th in Kitengela last weekend after suffering double punctures, the Finnish crew finished at the top of the leader board to earn their first ever Kenya title.

“It wasn’t the best outing but we are glad to have won the championship, it gives us positive thoughts ahead of the next season”, said an excited Tapio.

Rajbir Rai was the winner in Kitengela posting 1:06:59 ahead of Manvir Baryan and Jaspreet Chatthe.

Rajbir’s win is the fords first ever win in Kenyan soil for the last 3 decades, “From onset I knew we could push the car and improve on our results, everyone was first and after coming second at  CS  2 I knew I can go for the podium finish, it is such a great moment for us”, he said after the race last weekend.

Gurdeep Panesar defended his crown for the second year in a row in the co- driver’s category while Imran Mogul, Izar Mirza, Jasmeet Chana , Farhaz Khan, Asad Khan and Taiti Wachira made it to the top ten in the KCB Kitengela outing.

Rally Chix pair of Natasha Tundo and Chantal Young won the division three championship despite having retired after CS 5.

“It was the  first time ever in Kenyan rallying history that we retired following the gear problem, we looking forward to the Guru Nanak outing”, said Tash,.