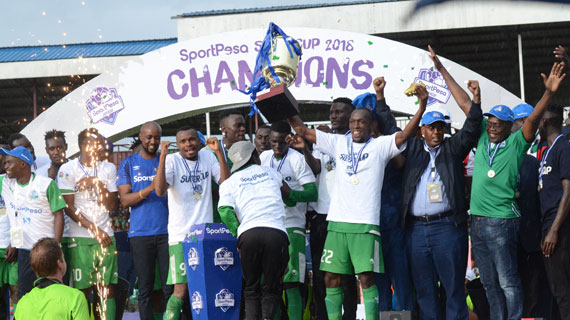 Gor Mahia head coach Dylan Kerr was over the moon as Gor scored two past his former employers Simba SC to clinch the SportPesa Super Cup title on Sunday afternoon in Nakuru.

Meddie Kagere and Jacques Tuyisenge scored in either half as Gor showed supremacy, handing themselves a ticket to play English side Everton FC in a friendly match at Goodison Park next month.

The Kenyan champions were emphatic and commanded the match from the first to the last whistle. They opened the scoring just six minutes into the game to send the full packed stadium into Frenzy when Kagere picked up Francis Kahata’s cross and shot past Aishi Manula.

Kagere was accorded time and space inside the box and Manula’s butter fingers did not help matters as he let the ball easily slip past his fingers.

Simba’s first chance at response came five minutes later when Rashid Juma had a shot from range but it skied over the bar. In the 28th minute, the pint sized forward had another chance but his shot from the right was well handled by Shabaan Odhoji.

Tempers flared at some point when Simba skipper Erasto Nyoni charged on Tuyisenge’s back hacking him to the ground, leading to skipper Harun Shakava storming the scene of crime for push and shove and was carded for failing to control his temper.

K’Ogalo should have doubled their lead a minute to the break when Godfrey Walusimbi picked ip Kahata with a delicious pass cutting through the defense but the midfielder’s shot went inches wide.

In the second half, Gor kept the pressure and were rewarded 10 minutes in when Tuyisenge volleyed the ball home unmarked inside the box from a Humphrey Mieno pass.

Simba then made changes as they sought to go all out attack, Juma coming off for Marcel Kaheza while defender Mlipili Yusuf came on for Hussein Mohammed.

Despite the attacking changes, Gor didn’t fluff their pre-match game plan and Tuyisenge almost caught Manula off with a cross from the right which was headed goalward but the ball rolled off the crossbar.

The Rwandese forward had another shot late on from range which was deflected for a corner by the Simba backline.