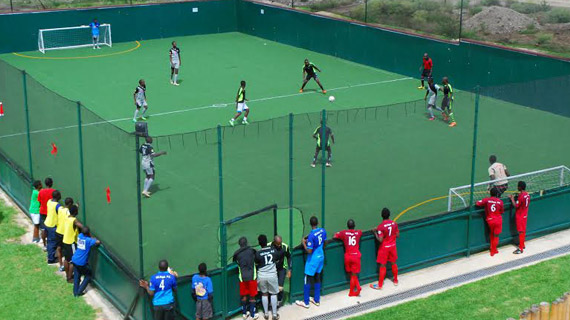 The second edition of the ‘King of the Cage’ 5-aside football tournament saw Superbru Stars emerge champions after a resounding 4-1 victory over Oil Libya Accel at the Greenpark Sundowner, Athi River.

The two sides were a class above their opponents in the group stages and it was no surprise that they went all the way to contest the final in the 5-aside artificial turf facility managed by Superior Homes Kenya. It was a one-side clash though as Superbru raced into a 4-0 lead, only allowing their overrun opponents a late consolation goal.

Kevin Mbithi helped himself to a quickfire hat-trick which included a stunning freekick as well as a penalty, with Fredrick Juma adding gloss to the scoreline. Patrick Mbike scored Oilibya’s consolation goal, his ninth of the competition.

A total of 11 teams participated in the tournament including corporate and community teams from around the area.

“This tournament not only shows our capacity to offer gaming facilities but acts a social platform, bringing people of different walks of life together,” said Judy Marako, the General Manager of Superior Homes, Kenya.

Jasper Ogari, Sundowner Marketing Admin added: “All over the world, small-sided football is proven to improve the fitness, morale and togetherness of the modern workforce. We hope that people will continue finding this and many other facilities we have useful.”