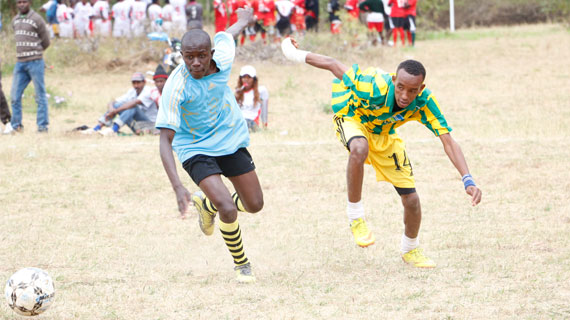 Brian ngurungu of nyangwa boys and Ramadhan of Isiolo boys

Airtel Rising Stars  Nzoia Region defending champions St. Anthony’s Boys showed their intent of retaining the title after coming from behind to beat arch rivals Kakamega High School 2-1 in an intense group match played at the Lodwar Primary School on Wednesday. This was the opening match of the Nzoia Region finals.

Harambee Stars under-20 striker James Mazembe had given the ‘Green Commandos’ a dream start in the match, only to be stunned by a hard fighting St. Anthony’s. Paul Esiemi grabbed a brace as the Kitale based school picked their second win of the championship and qualified for the semi-finals.

“It is not something new for me to beat Kakamega. I have always beaten them and today’s match was not special. We played very well, showed a lot of character to come from a goal down and our focus is now on the semi-final,” St. Anthony’s coach Moses Kidengwa said after the win.

In other matches played on the second day, Butula were 1-0 winners over Lokichang, the same scoreline Bukembe won over Lokichar High School. Kapenguria Boys were the highest winners of the day with a 3-0 whitewash of Ebwalio.

In the girls’ category, defending champions Wiyeta Girls were made to work hard before finally picking a 1-0 win over Archbishop Njenga. Former national and East Africa champions Tartar were also put through a tough duel by Brenda Girls from Bungoma before winning via the same scoreline.

Mudavadi Girls were the highest scorers for the girls as they beat Uhuru 3-0 gto begin their campaign on a positive note.

In the Eastern Region, defending boys’ champions Kathungi showed their intent, but it was not an easy win as they were made to work hard before conquering Samburu’s Nyiro 3-2. Kathungi came from a goal down before Ali Seid picked a hatrick with Nyoro attemping a comeback late on, only to fall short.

“Nyiro has always given us a hard time because both in 2013 and 2014, they almost made us miss out on the nationals and today, we did not expect an easy match. Tactically we were better today and this victory in the first match gives us confidence to go on and try defend our title,” Ibrahim Naika, the Kathungi coach said.

Last year’s runners up Kamiu from Embu were forced to a four-all draw by St. Daniel from Tharaka Nithi in an exciting end to end affair. Isiolo Boys, one of the teams to watch in the region were emphatic in their opening match, winning 3-1 against Nyangara Boys.

In the girls’ category, Embu’s St. Jude were 1-0 winners over Moi Girls from Marsabit while Mukothima from Tharaka Nithi whitewashed Embu’s Gategi 4-0. The latter also lost their second match, going down by a solitary goal to Gatutu.

Meanwhile, the Metropolitan region finals are expected to kick off on Thursday morning with defending champions Laiser Hill ready to fight for the defense of their crown. The Kajiado champions will begin their campaign against Mvuti from Machakos and coach Antony Kirimi is confident they have prepared well.

“We expect very stiff competition because there are very good teams this time round. We have had some very good preparation and I believe taking part in the Kajiado County League has made us stronger,” Kirimi said.

They will be looking on the trio of midfielder Musa Masika, younger brother to Harambee Stars winger Ayub Masika as well as Kennedy Owino and David Owino who were part of Kenya’s Under-20 national team.

Upper Hill who lost the title to Laiser last year on post-match penalties are breathing revenge and have vowed to give their all to recapture the crown.