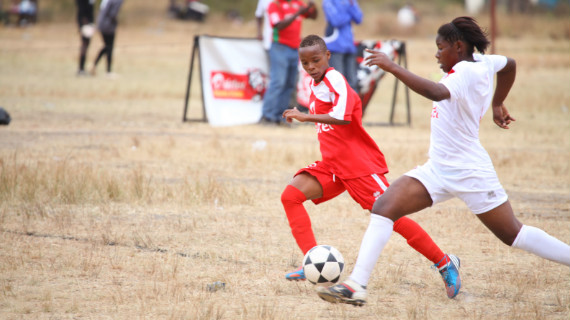 St John's Mwanahalima Adams (left) in action. Her team has been disqualified

The Kenya Secondary Schools Sports Association has disqualified Nzoia Region’s St Anthony’s Kitale and Coast Region’s St. John’s Girls Kaloleni  from the National finals.The decision was arrived at on the evening of Thursday 30 July in Machakos.

The two sides were found guilty of breaching the KSSSA player eligibility rules. St. Antony’s Kitale who had qualified for today’s semi finals were accused of fielding ineligible players while St. John’s were found guilty of fielding a player born in 1994, in contravention of the clause that requires teams to field players aged 19 years and under.

Following these events, the complexion of the boys’ and girls’ football pools and subsequent semi final pairings have been altered ahead of the action on Friday morning.

Olympic Girls who had finished runners up to St. Johns’ now top the girls Pool A while former champions Wiyeta have been handed a lifeline. The same applies to Kathungi who finished third in the boys’ Pool A, they will take up St. Anthony’s semi final berth and play Pool B winners Laiser Hill.