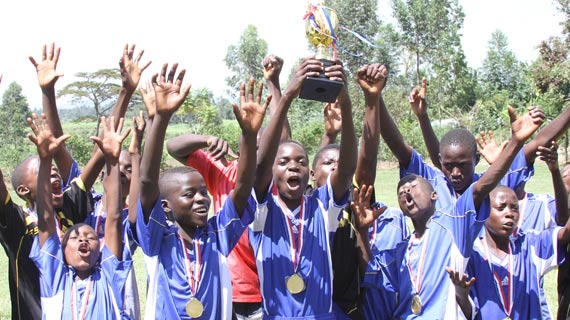 Smart FC are the winners of this year's Michezo Afrika end year Youth soccer tournament held in Bungoma on the new year's eve. The 2015 edition of the annual  tournament was sponsored by Ligi Ndogo's Samuel Machio who facilitated all winners' trophies and medals for individual performers.

Four teams took part in the two days tournament held at the Bungoma Sports Club with Smart FC from Matumbufu finishing as the best team with seven points from three matches having won two and drawn once.

In his remarks during the presentation ceremony , tournament sponsor Samuel Machio called on all coaches to observe a strict age ethics  calling on regional youth development leaders to work towards stamping out age cheating as a way of growing  genuine talents.

" I want to challenge all coaches in Bungoma county to be disciplined  by responsibly fielding  players who fit age categories as defined by tournament organizers. When you go against the codes of age restrictions because you want trophies then you are not helping your team , you are instead demoralizing the right talents because the younger ones will feel their performance was limited because they faced players who are older than them; that is not competition." He noted.

The next tournament will be held over the Ester holidays .