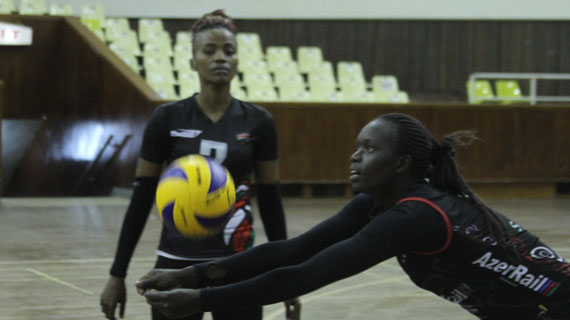 Mercy Moim and Janet Wanja during the national team training at Kasarani on Monday.

The national women volleyball team The Malkia Strikers’ technical bench has dropped six players from camp leaving only 22 in training as the team intensifies  preparation ahead of the  2018 FIVB World Championships set to take place in Japan between September 29 to October 30.

The team entered the fourth week in the non-residential training led by Coach Japheth Munala and Josp Baraza with boosted venue change as they moved from the basement to the gymnasium at the Safaricom Indoor Arena in Kasarani.

Jane Mumbua and Josephine Wafula, both from DCI, Bungoma County’s Karen Cheruto as well as the KCB trio of Nancy Mulonza, Eaglay Kuloba and Lincy Jeruto, were among the unlucky ones to face the cut.

Speaking to michezoafrika.com from their training base at Kasarani, coach Munala explained that the Kenya Volleyball Federation was going through financial constraints and therefore the technical bench had to reduce the squad to a provisional 22 from 28.

“In as much as we want to ultimately reduce the squad to 12 or 14 who will participate in the October Championships, it was a little early to cut the 6. The technical bench would have loved to have the provisional squad intact. However, the national team players are entitled to their transport allowances, but since we have an inconsistent flow we had to start reducing early. Although there are other factors which guided us,” said coach Munala in a post-training interview.

The coach added that the team intends to break the residential camp on Friday, allowing the players to report to their clubs for preparations on the national league on July 20 – 22 at Changamwe grounds in Mombasa.

The Malkia strikers are also set to have a representation from a team of four that has just graduated from High School. The quartet includes Caroline Sirengo, Jemima Siangu (Kenya Pipeline) Lorine Chebet (Kenya Prisons) and Sharon Chepchumba.

Coach Munala expressed confidence in the four, tipping them to make the final 14 if they continue to show the quality they have shown in training.

“We are preparing for the future of volleyball in Kenya and these four are making the transition. These four are fresh from school and are showing some sparks of quality. They have impressed us and I won’t be surprised if they make the cut into the Japan-bound squad,” emphasized coach Munala