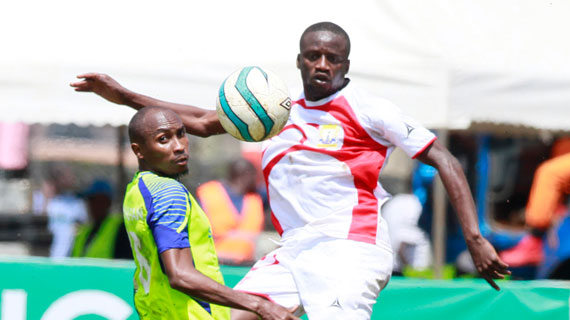 Kenya’s akamega Homeboyz once again failed to flourish on post-match penalties after losing 4-1 to Tanzania’s Singida United in the third and fourth play-off match of the tournament at the Afraha Stadium in Nakuru on Sunday.

Homeboyz lost two of their penalties and scored one while Singida scored all four of their attempts. Benjamin Oketch skied his effort while Collins Kisuya had his tame kick saved by Singida keeper Peter Manyika.

Deus Kaseke and Adam Miraji scored SIngida’s first two handing them a 2-0 advantage before Noah Wafula restored some faint hopes scoring Homeboyz’s third. Shafik Batambuze who had just stepped off the bench made it 3-1 with the responding kick before Danny Lyanga scored the fourth meaning there was no need for Homeboyz to take their fourth.

The game had to be decided on penalties after a 1-1 stalemate in regulation time, Lyanga’s goal in the hour mark taking Singida level after Wycliffe Opondo’s fourth minute opener.

Opondo who had started the match ahead of Ali Bhai scored with a neat finish inside the box after Singida failed to clear a cross with Keiphas Mutuu who had started ahead of the injured Allan Wanga winning possession and sending his mate through.

Singida almost made a response three minutes later but keeper Mike Wanyika made a good reflex save to push Deus Kaseke’s cross from the right against the crossbar when it seemed destined for the net.

Homeboyz were solid and one move off the counter after 17 minutes when Eston Esiye put Moses Mudavadi through but the forward’s shot after cutting in from the right went straight to Manyika.

Esiye who had been impressive in midfield came close in the 20th minute with a shot from range which Manyika spilled, but an onrushing Mutu failed to capitalize on the rebound.

Singida came back a more organized side in the second half and it took them only 15 minutes to equalize when Lyanga dived in to head at the edge of the six yard box off Elinywesia Sumbi’s cross from the right.

The goal seemed to energize the Tanzanians as they camped in Homeboyz’s half but could not make the most with a second goal. Also, the decision by Paul Nkata to withdraw Esiye for Noah Wafula was not much of a perfect pick as Singida dominated more in midfield.

Wafula’s impact from the wing didn’t bear results as most of his crosses went overboard.