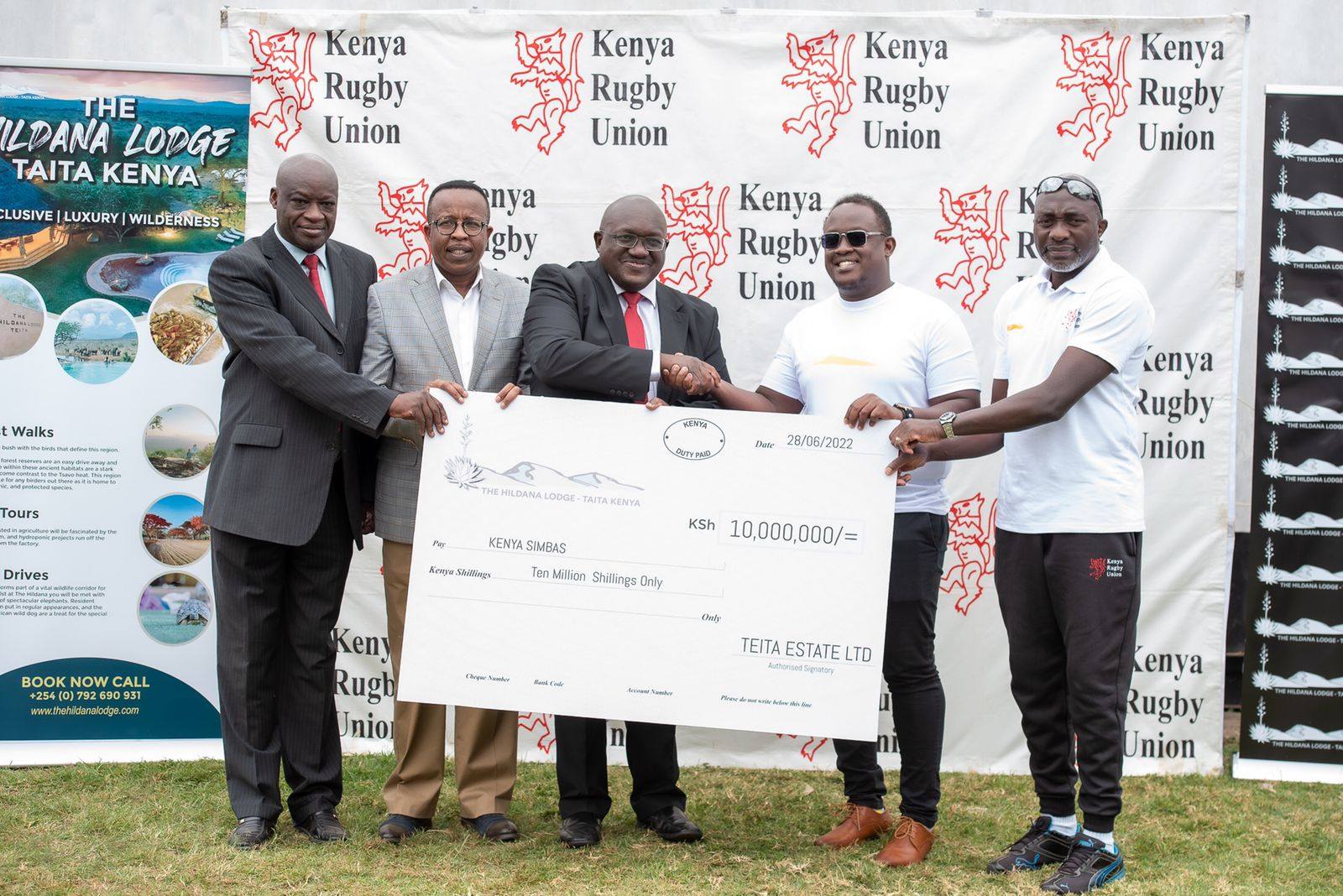 The Kenya men’s fifteens national team, The Simbas, has received a boost of Ksh 10 million in sponsorship from Teita Sisal Estate through its lodge, The Hildana Lodge ahead of the Rugby Africa Cup which doubles up as the Rugby World Cup African qualifiers set for July 1st to July 12th 2022 in France.

The Kenya men’s fifteens national team, The Simbas, has received a boost of Ksh 10 million in sponsorship from Teita Sisal Estate through its lodge, The Hildana Lodge ahead of the Rugby Africa Cup which doubles up as the Rugby World Cup African qualifiers set for July 1st to July 12th 2022 in France.

Speaking at the sponsorship announcement, Kenya Rugby Union Chairman Oduor Gangla said, “The Kenya Rugby Union appreciates this timely partnership that will certainly be a boost to the Simbas who have been in intense preparations over the past two years for this assignment. Our preparations started with the Rugby Africa Cup Pool B fixtures that we hosted last year in Nairobi before two tours of South Africa in November last year when the Simbas played in the Stellenbosch Quadrangular and the more recent tour that saw the team participate in the Currie Cup First Division competition between May and early June this year.”

“These funds will be used to ensure the team prepares and performs well in France, “added Gangla.

He further disclosed that the Union has spent close to Sh50mn on the team so far, including almost 11 weeks in South Africa for the Currie Cup and their budget for the World Cup qualifiers was Sh22mn.

Jimmy Mnene, the Teita Sisal Representative expressed appreciation to the company for taking pride and delight in supporting the team, saying, “The company has been a strong supporter of both Kenya Simbas (senior XVs men) and Chipu since 2019. In the words of Philip Kiryazi, MD Teita Sisal Estate, our wish as a company is to promote and develop our great team to be at the forefront of International rugby.”

'On behalf of Teita Sisal Estate and the Hildana Lodge, it is our honor to be able to be associated with The Simbas and the KRU. We are delighted by our continued investment in the sport of rugby in the country. This is not just an investment, it is a commitment to the society through transforming and developing the sport of rugby in Kenya. The future of the game has to be promoted to ensure consistency in performance and growth of the game to taking the team to the Rugby World Cup in 2023,” he concluded.

Simbas Head Coach Paul Odera expressed his delight at the sponsorship, saying, “This partnership couldn’t have come at a better time. We are fully focused on the task at hand, which is to secure Kenya’s first ever qualification to the fifteens Rugby World Cup. We go out there with hopes and dreams of the millions of Kenyans and we will make you proud. Thank you once again for this gesture.”

“It is truly humbling when people make a commitment to support their team on this journey. The relationship with Hildana started in 2019. We formed a group called the Friends of Simbas and their commitment has been that Kenya qualifies for the World Cup. These are very committed people who are always willing to support the team,” added Odera.

The Simbas leave the country at 1.00am on Wednesday 29 June and begin their campaign with a quarterfinal fixture against Uganda at 4.00pm EAT on Saturday 2 July. The semifinals are set for 6 July with the final slated for 10 July. The winner of this tournament earns direct qualification to the 2023.