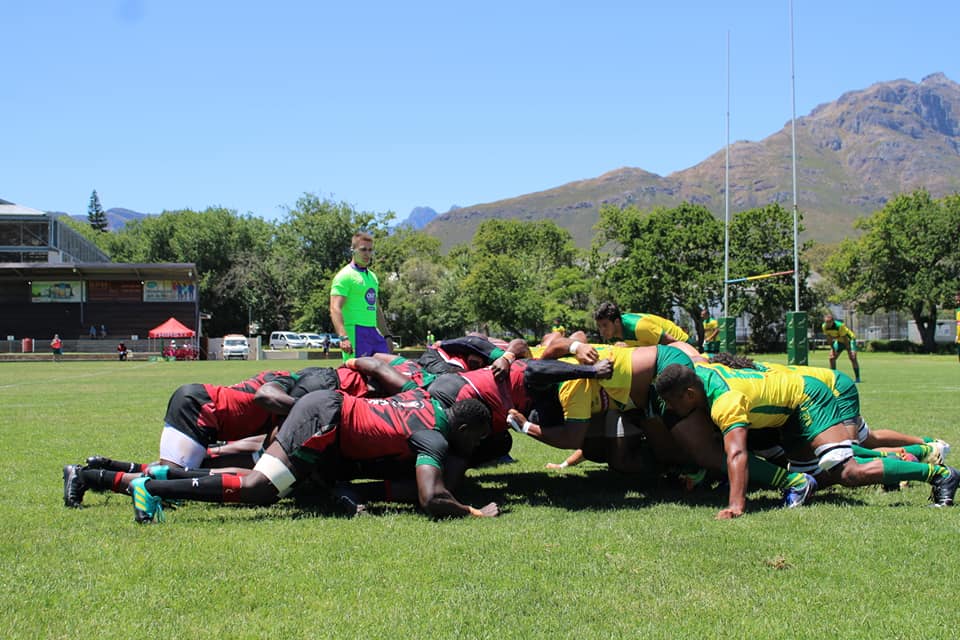 Brian Waraba went over the whitewash from a rolling maul, Geoffrey Ominde sure with the conversion for a 7-0 lead before the hosts drew level with a converted try.

They signaled their intent right from the start, lock Thomas Okeyo breaching the Bulldogs defense but stopped short of the try line.

Brian Waraba went over the whitewash from a rolling maul, Geoffrey Ominde sure with the conversion for a 7-0 lead before the hosts drew level with a converted try.

Ominde then gave the Simbas the lead for good with a penalty before converting Vincent Onyala’s try for a 15-7 lead at the interval.

Replacement fly half Jone Kubu then set up Timothy Okwemba for the first of his two tries as the Simbas went 20-7 up before Border responded with an unconverted try, the game finely poised at 20-12.

Bethuel Anami then crossed the chalk for the Simba’s bonus point try before Okwemba landed his brace, Kubu contributing a conversion and penalty to secure the result for the team who are using this competition as a preparation for the Rugby World Cup qualifier against Uganda on 2 July in France.

Speaking after the game, Head Coach Paul Odera said, “We played with great confidence and took the game to Border from the start. We backed ourselves and we were ambitious enough to go for 5 points instead of easier 3 points.”

“Our scrums and lineouts improved a great deal in this game. Without a set piece it is not possible to compete at this level, “he added.

Odera hailed the team’s defense and discipline, saying, “Our defence went up two or three levels from last week. We were tackling a lot better, good line speed and when we kicked we chased hard and shut down Border. Our discipline was a lot better than last week. Which is pleasing.”

“The win gives the tour party plenty of confidence going forward. It also puts us in a good frame of mind as we prepare to play Uganda on the 2nd of July, “ he concluded.