Simba fans promise to teach Gor a lesson on Sunday 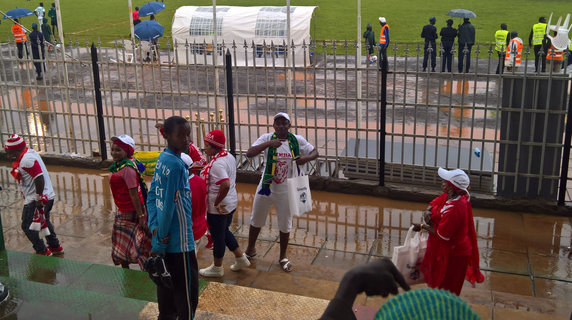 Photo: A section of Simba FC fans at Afraha

The build up to Sunday’s SportPesa Super Cup final between Gor Mahia and Simba FC is hitting the top gear with fans from both sides throwing banters in a show of bravado.

On Thursday, Simba FC fans stuck at Afraha Stadium to confirm their opponents after watching their side beat Kakamega Homeboyz on post-match penalties.

“We are here to get the SportPesa cup. Simba ni mmoja tu Afrika Mashariki  na hatishwi na yeyote.We are the kings of the jungle and football. Mtayarishe mifuko ya kubebea magoli (There is only on lion in East Africa (Simba FC) and he is not intimated by. Prepare your bags for the many Simba goals,” shouted the Simba Fc fans.

“You have just survived through penalties. No goals to show for the games so far so how are you going to score against the best team in East Africa?  We shall beat you proper. Sisi sio rika yenu (We are not your age mates),” Gor Mahia fans led by diehard Bishop Sudi Jaimbo replied.

Gor Mahia remain unbeaten on Kenyan soil on normal time this year. Sunday’s final presents them an opportunity for a rematch with English Premier League side Everton FC at Goodison Park, UK after a 2-1 loss in Tanzania last year.

Apart from the UK trip, the winner of the SportPesa Cup will pocket a cool Ksh 3 milion while the loser takes home Ksh 1million.

The Gor Mahia versus Simba FC final will provide Gor coach Dylan Kerr a chance to face his former employers. In his 2015-16 stint, Kerr guided Simba FC to a top three finish.

The Briton braved the heavy downpour at Afraha Stadium to issue instructions to Gor Mahia that ensured passage to the final.