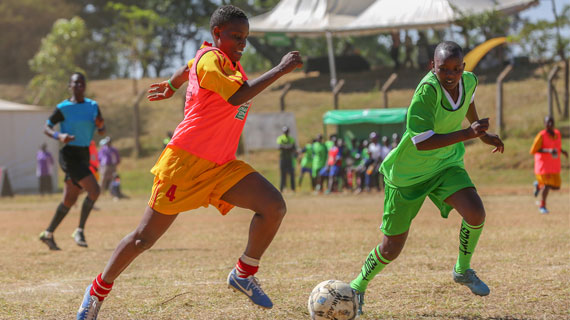 A thrilling final is expected on Sunday morning at the Kanduyi stadium in Bungoma when Shinyalu Girls face Bishop Njenga from Lugari in the girls finals of the Western region Chapa Dimba finals.

The winner of the match will earn direct qualification to the national finals to be held in Kakamega in March in addition to the 200,000 shillings prize money.

In the first semi final played on Saturday, Bishop Njenga came from a goal down to defeat Chelebei Girls from Mount Elgon 3-1

Chepkemoi Venah had given the host team the opening goal at the half hour mark but double strike by Mato Sharon and Wanyonyi Violet cancelled the first half lead as the Lugari side romped home with maximum points.

“Today’s match was very challenging but I am glad we made it to the finals. One of my players got a red card at the 26th minute therefore; I had only 10 players for the rest of the match. It took some effort to get back to the game but yes, we did it! We are looking forward to a good game tomorrow”, said Fred Serenge, Coach – Bishop Njenga.

The second semi final was a smooth affair for Shinyalu girls as they dismissed Kigandole from Busia County 4 -0 .

The girls final will start at 9:00AM at the Kanduyi stadium