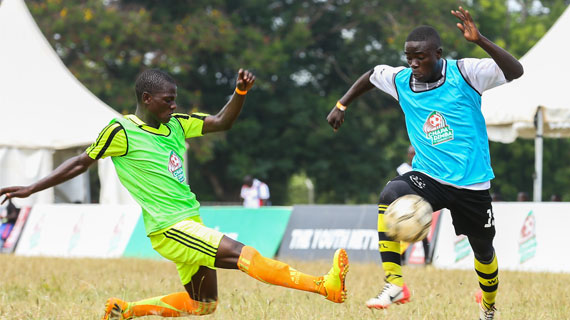 Shimba Hills triumphed after putting up a skillful match against Breezeham scoring 3-0 within the regulation time.

The winners each received a cash reward of Shs 200,000 and will now proceed to the National finals set for the 24th and 25th March, this year. At the grand finale, the winning team will walk away with Sh1 million each and an opportunity to go for an international training and mentorship camp in London in April 2018.

“We have enjoyed the matches today with incredible football talents displayed. We applaud the winning teams for the job well done! We are very proud of this partnership with Safaricom for it promotes grass root football across the country,” said Football Kenya Federation President Nick Mwendwa.

The teams that have so far qualified for the national final include Rift Valley’s Kapenguria Heroes and Tar Tar Girls as well as Mwingi Junior Academy and Ngakaa Talent Academy from Eastern.

Western, Central and Nairobi regions are scheduled to hold their regional finals in the next few weeks.

“The yield of this tournament is for sure impactful. We celebrate the milestone achievements that have so far been realized. We are proud to be part of a competition that will produce the next generation of football giants and we urge all the youth to be part of this journey. We congratulate all the teams that have already made it to the finals! We are all proud of you,” said Sylvia Mulinge, Director -Consumer Business

Over 380 games were played across Coast region with 166 teams taking part in the competition that kicked off with group stages on 2nd December 2017.