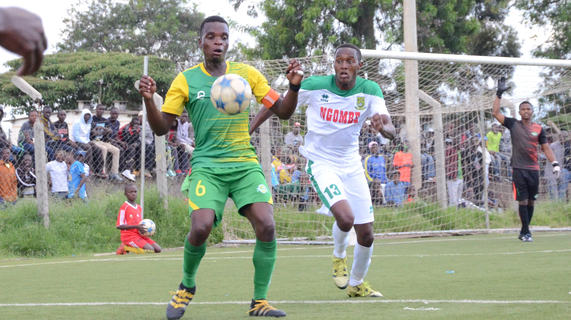 Kariobangi Sharks winless streak in the Kenyan premier League stretched to seven games as they were held to a 1-1 draw by Mathare United at the Camp Toyoyo in an entertaining fixture on Sunday evening. Skipper Patillah Omotto’s second half goal drew Sharks level after Clifford Alwanga had sent Mathare ahead.

Mathare had a chance of moving to second spot with a win but the point gained saw them remain at third.

Sharks had picked up the game with some good pace and the return of Sven Yidah from injury had given them some stability in midfield. They survived an early scare from Mathare when John Mwangi’s hot from the left after finding himself in acres of space hit the side netting.

William Muluya’s charges picked up the cue from there and went on the attack. Former Mathare boy Harrison Mwendwa twice came close to booting home against his former employers but in both instances, his efforts went agonizingly wide.

In the first opportunity, he drifted into the box after a good run off the left but his final shot destined for the bottom left went inches wide. Minutes later, a sweeping move by Sharks on the left ended in Francis Manoah swinging a cross from the left which Mwendwa volleyed wide.

In the 20th minute against the run of play, Mathare got into the lead with the same combination that won them a point against leaders Gor Mahia last season. Martin Ongori picked up the ball from distance, swung in a cross which Alwanga beautifully headed home.

Despite going down, Sharks kept pushing and they had another opportunity with Manoah’s header inside the box coming off Ongori.

Mathare coach Francis Kimanzi was forced into a sub as the second half started, goalscorer Alwanga coming off with an injury and was replaced by Chris Ochieng.

However, it was the home side who had the hunger to drive just as they did in the opening 45 minutes. Nine minutes into the second period, Muluya’s men were back on level terms when Omotto’s bouncing header somehow found a way past keeper Robert Mboya from a Bolton Omwenga corner.

A tight tactical tussle ensued between teacher (Francis Kimanzi) and student (William Muluya). Last season, Sharks had the last laugh winning both home and away fixtures but this year, the tie proved to be a tough one.

In the 70th minute, Mathare almost got back into the lead when Ochieng’s stinging shot from range was spilled by keeper John Oyemba but uckily for him defender Geoffrey Shiveka was well placed to clear the danger.

Late on, Sharks had a chance off a counter when substitute Erick Kipkurui set up Sidney Lokale inside the box, but the teenage striker’s effort at goal was wide.