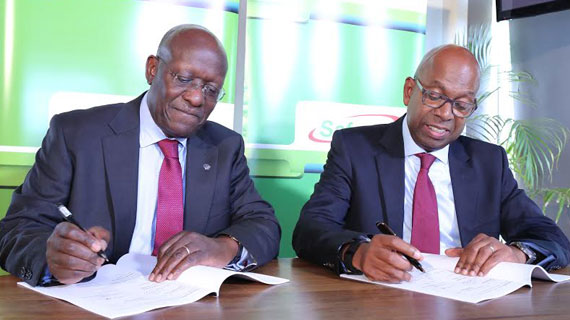 The new deal will see Safaricom become KRU’s official Communications Partner for all rugby tournaments organised by the union. Safaricom will also give cash sponsorship to help fund KRU and its partners host rugby events in various counties throughout the year.

As the official Communications Partner, Safaricom will cater for telecommunications costs incurred by KRU and the National Circuit hosts in organisation of tournaments, as well as provide free Wi-Fi connectivity and a fully kitted media centre at each tournament.

The events falling under this sponsorship deal include: the six tournaments that make up the National Circuit – which kicks off in August – Safari Sevens in September, and the15s tourneys for both men and women.

The sponsorship is in line with Safaricom’s commitment to transforming lives by supporting the identification and nurturing of sporting talent at national and county levels.

Safaricom has in the last six years invested over KES 700 million in rugby, funds that have been used to organise tournaments, develop the game and improve facilities at the Kenya Rugby Football Union of East Africa (KRFUEA) Grounds.

“We appreciate the role KRU is playing in developing rugby in the country, giving young men and women an opportunity to change their lives through sport. We see great value in supporting the identification and nurturing of new talent by working with the rugby union. We also note that through KRU’s efforts Kenya has fielded a team in the Rio Olympics,” said Bob Collymore, Safaricom Chief Executive.

The first tournament in the 2016 Rugby 7s National Circuit will be the Prinsloo 7s, to be held at the Nakuru Athletics Club on 6thAugust.

KRU Chairman Richard Omwela noted: “We are excited to renew our working relationship with Safaricom and having them on board as our official Communications Partner will no doubt improve our ability to deliver on the expectations of both the players and fans as we capture and document the continued growth and development of the sport in the country.”

“The signing of this partnership reinforces our commitment to collaborating with organisations that believe in the sport as much as we do, and in building these partnerships so that together, we can continue to grow Kenyan rugby,” he added.