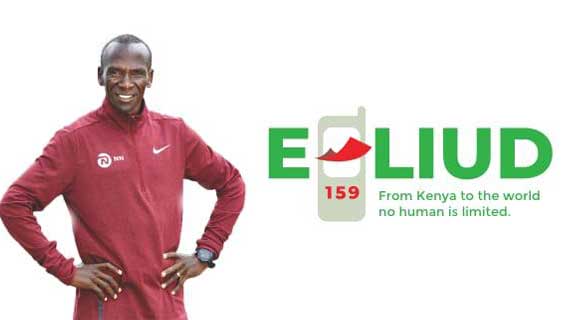 Safaricom has offered to change their Iconic MPESA Logo in honour of Eliud Kipchoge's attempt to run marathon under two hours in Vienna this weekend.

Safaricom  has announced a raft of measures to support Eliud Kipchoge in his challenge to become the first ever athlete to run a full marathon in under 2 hours. This includes a partnership with Kipchoge that will see the world-renowned athlete become M-PESA’s brand ambassador, where he will champion the service’s capability of empowering Kenyans to send and receive money both in the country and across the world.

“We are honoured to renew our commitment with Eliud Kipchoge and to support him as he races against time. As part of our support, we will be empowering any Kenyan across the country to stream the challenge for free, wherever they are, with the advantage of our strong network and wide coverage. For every Kenyan, Kipchoge is a reflection of our resilience and determination as he has taken on challenge after challenge,” said Michael Joseph, CEO, Safaricom.

Safaricom has also dedicated its iconic M-PESA brand in support of Kipchoge’s superhuman endeavor. Over the next seven days, the company will rebrand M-PESA to “Eliud 1:59” to commemorate the challenge.

“The last few years have seen Kipchoge emerge not only as one of the greatest athletes ever, but also as one of the most accomplished people ever. It is a privilege to partner with him on this historic occasion and as an icon, it is only befitting to offer our M-PESA brand in his recognition,” added Michael.

Kipchoge’s partnership with Safaricom dates back to 2017 when the company launched its “Twaweza” brand campaign with the marathoner taking the role of brand ambassador.