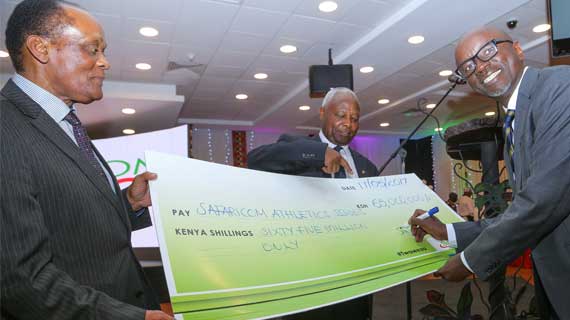 Safaricom today launched the 5th edition of the Safaricom Athletics Series, officially kicking off the annual athletics calendar at a ceremony held at the Michael Joseph Centre.

The Safaricom Athletics Series, which is now in its fifth year, will be sponsored by the telecommunications firm at a cost of KSh.65 million, an amount that includes direct cash sponsorship as well as marketing, event support and merchandise.

Speaking during the launch Safaricom Director for Regional Sales and Operations Steve Okeyo said the return of the Series signified the company’s continued commitment to supporting the identification and nurturing of sporting talent across the country.

“We have seen the powerful role that sports plays in uniting Kenyans, uplifting families and creating careers. Many of the current generation of athletics stars have participated in the Safaricom Athletics Series, with the likes of Conseslus Kipruto and Nicholas Bett actually catapulting their careers through this event and going on to represent Kenya at the 2016 Olympics,” said Mr. Okeyo.

Safaricom will also sponsor the IAAF World Under 18 Championships trials taking place in Nairobi from 12th – 16th July. Though not included in the Athletics Series, the sponsorship will feed into its efforts by providing financial support in line with Safaricom’s continued investment in sports in Kenya.

“Our sponsorship of the IAAF World Under 18 Championships is testament to our belief in the wealth of sporting talent we have among our youth. Having experienced the power of bringing people together through sports we’d like to see more stars being discovered through this sponsorship, as we work together with organisations such as Athletics Kenya and the Deaf Athletics Association of Kenya among others to ensure that Kenya continues to be recognised as the home of athletics champions,” said Mr. Okeyo.

One race under the banner of the Safaricom Athletics Series – the Safaricom Deaf Half Marathon – already took place in Meru this past weekend, where Peter Toroitich and Juster Kwamesa took 1st place in the men’s and women’s 21km races respectively.

The next race on the calendar is the Safaricom National Deaf Athletics Championships, which will take place in Uasin Gishu County on the 23rdand 24th of May.

In addition to the races Safaricom will hold free medical camps organized and managed by the Safaricom Foundation and its partners, who will offer free medical consultation and treatment of minor ailments to residents of the areas toured by the Series.