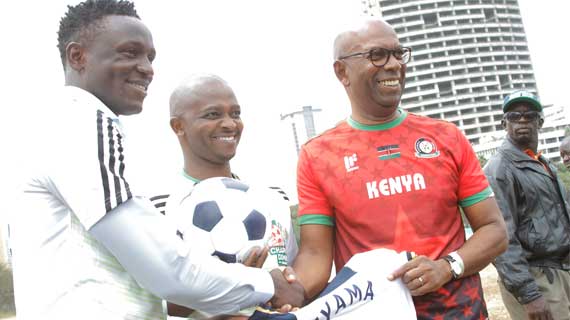 Safaricom on Thursday afternoon announced the return of Kenya's biggest grassroots youth soccer tournament.The tournament, dubbed Chapa Dimba, marks the return of the former Sakata Ball tournament that will benefit from a massive one hundred Million shillings sponsorship from the giant telecommunication company.

Chapa Dimba was launched during a colorful ceremony held at the Railway Club in Nairobi on Thursday with Harambee Stars captain Victor Wanyama also unveiled as the official tournament ambassador and role model.

The Under 20 tournament will be managed by Football Kenya Federation and will run between August 2016 -March 2017.

According to FKF President Nick Mwendwa, the championships will be played  across eight regions with teams being drawn in groups at the sub branch level. The winning regional teams will then play in a national final in Nairobi  early in 2018 where the winner in both the men and women categories will walk away with One Million shillings in prize money.

In addition, the winning teams will get a chance to tour London for a week where they will be hosted by Victor Wanyama who plays for English Premier League side Tottenham Hotspurs.

Speaking during the launch , Safaricom CEO Bob Collymore reiterated the need to wipe out corruption from sports management. Collymore narrated how  his company decided to cancel the Sakata Ball tournament in 2012 after the former FKF officials led by Sam Nyamweya failed their integrity threshold.

"Sports represents the best of humanity but when you inject corruption in sports  you kill dreams. As Safaricom we are proud to launch  this exciting tournament that will give young talents an opportunity to play at a big stage." He noted.

Collymore encouraged more sportsmen to uphold integrity and to work hard  to achieve their desired dreams, "The impact of sports is massive. We chose on Victor Wanyama because he represent every value that we stand for as Safaricom. He has worked hard , he is disciplined , has passionate for teh growth of the game and we hope many more young talents will be inspired."

Victor Wanyama called on teams to register in large numbers and use the opportunity to connect and have fun, "This is a great opportunity for many youths out there and I personally thank Safaricom and the team for giving the young talents an opportunity to find out their potential."

The launch was also attended by FKF officials led by President Nick Mwendwa who assured that the tournament will be run in a professional manner across the country.

Registration for the competition which targets boys and girls aged 16 – 20 years opens on Monday 3rd July with games being played countrywide from September 2017 to March 2018. Teams can register for the tourney via the Safaricom Website (http://chapadimba.safaricom.co.ke/) or pick the registration forms from any Safaricom shop or Local FKF Branch Office.