ROVANPERA: I think we did a good job 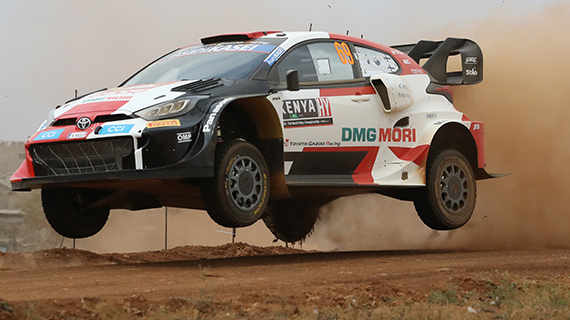 Kalle Rovanpera is pleased to be carrying a 22.4sec buffer into Saturday’s monster leg which will take crews to Elementeita, Sleeping Warrior and Soysambu.

“I think we did a good job,” reflected Rovanperä, adding: "The plan was to be fast and safe and we are in a good position now, but tomorrow will be very challenging for sure.

But the World Rally' Championship leader candidly admitted that he had never really experienced anything like this before.

"Last year we didn’t have this many soft sections of road, so that was something a bit new this year. Of course, it’s always challenging here. There was still some [road] cleaning on the second pass, but other than that we have enjoyed the stages - except the last one - I think we all felt relieved to finish that,” the Finn added.

Katsuta was demoted from second to fourth overall in the final stage.

The Toyota youngster had dropped time whilst passing a stricken Craig Breen - who retired his M-Sport Ford Puma with front right suspension damage - and eventually ended 1.3sec down on Tänak

The Japanese nevertheless moved back into second overall after event stewards corrected his time for Friday’s final stage.

Upon investigation, rally stewards agreed that Katsuta was hindered by Breen’s car and issued an amended stage time of 18min 2.1sec - 10 seconds faster than his original time.

The decision puts the Japanese driver back into the runners-up spot, behind leader Rovanperä and ahead of Elfyn Evans.

Day three begins with Soysambu (29.32km), which has been lengthened since last year. Next up is a blast over Elmenteita’s (15.08km) oft-used tracks in the Delamere Estate, followed by Sleeping Warrior (31.04km), set in the shadow of a hill that resembles a Masai warrior lying down.