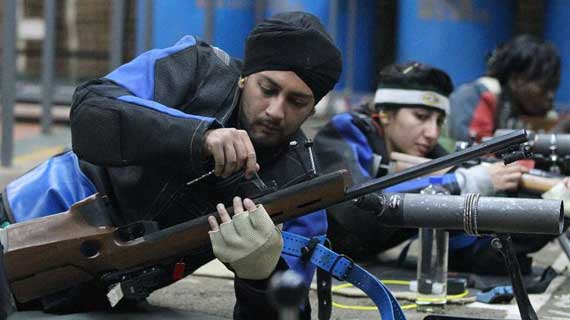 Gulraaj Sehmi adjusting his rifle during a previous shoot

The elusive Highest Possible Score of 600 is beckoning for Kenyan small-bore riflemen.

They both scored one point lower than Kenya’s national record (596) set by Gulraaj in February 2017.

Gurupreet Dhanjal, the small-bore captain said: “Competition at the top is really heating up and I believe it is only a matter of time before we reach the elusive 600 score,”

To fill places in the top four were Dhanjal who scored 588, whereas veteran Satiender Sehmi had 585. Maurice Morara was too good for his class (X) as he tied with Satiender on 585 points. John Serem was second in Class X with 577 and was closely followed by Sunny Sian with 576.

Harjinder Panesar downed an impressive 579 to top Class O, leading the fast raising Clifford Kiptarus (577) and Peter Muli (570) to the cluster’s medal bracket. Class Tyro was a ladies’ affair as GSU’s Grace Rantille carded 565 points to win and was accompanied to the podium by Miriam Chepkirui (560) and Belinda Akoth (554).

In another Kenya Shooting Sports Federation competition, Linet Owiti won the overall title of the Air Pistol tournament held at the Kenya Regiment Rifle Club, Lang'ata. Owiti downed a total of 530 points out of the HPS of 600 to bag the title.

She beat her closest opponent Shitul Shah (KSSF’s Air Weapon captain) by eight points (522) in the second half of the 12-round competition. The two- Owiti and Shah- had tied at 259 points after the first six rounds but several wide shots in the eighth, 10th and 11throunds consigned Shah to the second place.

Idris Kasmani was third on the podium after he amassed 520 points. Aviator Maryanne Cherotich closely followed on the fourth position with 519 points as Guru Ghaley completed the top five with 516.