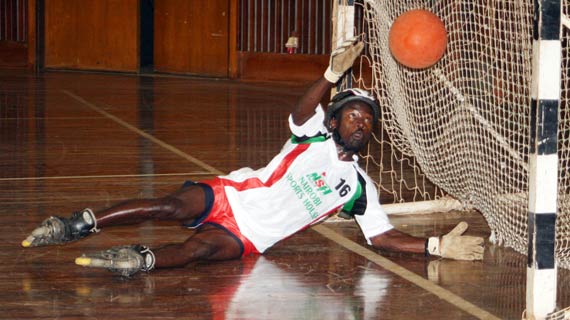 Jomo Kenyatta University of Agriculture and Technology have extended their unbeaten run to seven matches after beating visiting Meru University in the men’s roll ball premier league played on Sunday at the Moi Sports Center Kasarani.

JKUAT who remain unbeaten this season, showered their Meru counterparts 14 goals with no reply, a win that gives JKUAT a huge 12 points’ lead following their five victories and two draws.

Decathlon Tigers summed up the Meru outfit’s rude welcome to the top flight league with an 11-0 hammering. Consequently, Meru University remains winless and at the bottom of the eight-team league. In another men’s tie, Decathlon Tigers went down 1-2 to Reccebellas Roll Ball Club.

The traveling Meru University women’s team did not write a better script from their male counterparts as they lost all their five fixtures without scoring a goal. They opened their 2019 campaign with a 0-3 defeat to KU and narrowly lost 0-1 to JKUAT.

League leaders St. Paul’s University clipped their Meru counterparts 3-0 and second placed Glory Outreach Assemblies ran over the former with a 4-0 win. Meru University squad also had to sock in a 0-5 beating from the Hornets.