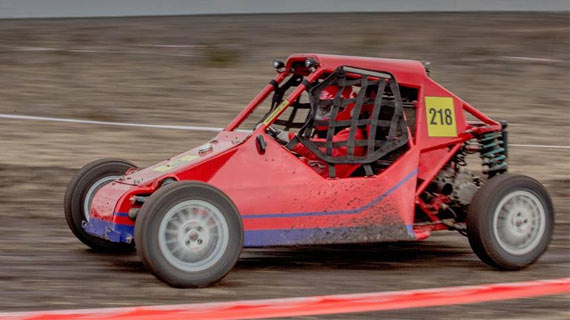 After finishing second twice in the first three legs staged thus far, former Kenyan Karting Champion Michael Kinoti will be going for his maiden career win when the National Autocrioss Championship enters its fourth round in Mombasa next weekend.

The event, organized by Mombasa Motor Club (MMC), has attracted 30 drivers from Nairobi and 10 from the coast.

In an interview, Extreme Sports sponsored Kinoti said he will be aiming for speed, consistency and a trouble free event as this is what heI feel is the right formula for a win.

“I want to continue improving my driving skills, and considering the improvements I have made as a driver and the upgrades we have given the car, now is the time for me to aim for the top spot.

Definitely I want to push my limits in the next race, as you can never truly know how fast you can go.

My aim is to surpass my last performance and continue unlocking the potential of both myself and the car,” said Kinoti who made his Autocross debut lsate last year.

Imran Hakada leads the series with 64 points with Kinoti on49. Shalien Mughal of Team Izmir is lying third on 45 ahead of Karan Sehmi on 38 points.

The Bambino class for kids has the Smith siblings Rio and Sean and defending champion Ryan bailey.

Kinoti is happy that the buggy settings have been improved a lot, “at the end of last year an oil pump failure forced us to rebuild the engine, but it has turned out to be a blessing in disguise as the new engine is better than our first one. The car is definitely producing more power and is getting around the corners quicker. We have also made some minor suspension adjustments which have made the car easier to handle in comparison to last year where it didn't corner as well,” added Kinoti.