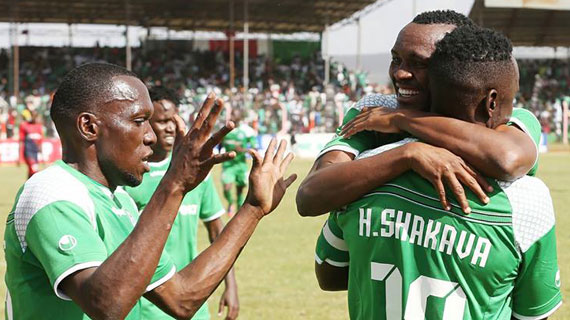 Gor Mahia established a six point gap at the top of the Kenyan Premier league standings with a slim 1-0 win over Sony Sugar in Kisumu on Wednesday.

The defending champions kept a clean sheet for the first time in five league games to move to 34 points with two games at hand and still with an unbeaten record.

Last minute first team inclusion Ephraim Guikan tapped home the lone goal of the match in the first half as Gor bounced back to winning ways after a nervy 3-3 draw with Sofapaka in their previous league assignment.

Coach Dylan Kerr fielded his strongest squad and were it not for some wanting finishing and brilliant goalkeeping from Sony Sugar keeper Kevin ‘Saha’ Omondi, the scoreline would have been hugely different.

As early as the third minute, Gor had already asked some questions. Meddie Kagere arrived well in time to meet George Odhiambo’s cross from the left, but the Rwandese forward’s header went over. On the quarter hour mark, the ball fell graciously on Humphrey Mieno’s path after a Sony defender blocked Ernest Wendo’s shot, but the midfielder’s rasping effort went wide.

Omondi was called into action in the 18th minute palming away a stinging shot from Meddie Kagere who had picked the ball after a schoolboy error from the Sony midfield to lose the bal.

Gor kept exerting pressure and it finally paid off after 37 minutes when Guikan slid in to push the ball past Omondi from an Innocent Wafula cross.

In the second half Sony were determined to get their heads back into the match, but in the final third, they came across a defensive wall that they failed to hack a way of trimming down.

After a few minutes of threatening moves from Sony, Gor took back the wheel and it was only Omondi who came between them and a second goal. The shot stopper, previously with Nairobi City Stars prevented Gor’s three attempts.

He first leapt well to his left to parry away a freekick from Francis Kahata before back to back saving from Kagere and Guikan off the rebound.

He then twice kept out the same duo, this time punching away Kagere’s first time effort after being put through by Odhiambo before punching away Guikan’s effort from the rebound.

Sony had another rare chance in the 67th minute when Steve Otieno raced away from his markers on the left before delivering a low cross, but Fredrick Onyango’s attempt to direct it past Boniface Oluoch in the Gor goal was ruled offside.

Kagere should have sealed the tie with three minutes left when he raced into the box from an Odhiambo pass, but his effort went inches wide after sending Odhiambo the wrong way.