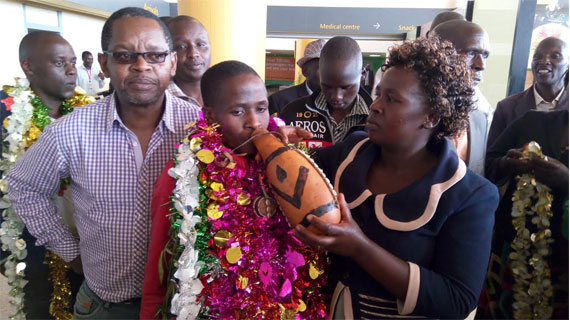 Former Kenyan athlete turned Bahraini Ruth Jebet has failed doping tests according to a report in The Guardian. The report citing "prominent sources" states that Jebet has tested positive for a performance-enhancing drug that could be the banned blood booster EPO.

The test results have however not been confirmed by Athletics Integrity Unit, which processes all doping tests in track and field.

Her agent Marc Corstjens was utterly shocked by the news when contacted by The Guardian.

“Honestly I am surprised and shocked. I am absolutely not aware of anything. I tried to reach Ruth but her phone is not answering. I have absolutely no official information.”

Born in Kenya in 17th November 1996, Jebet switched nationality at age 16, opting for the oil rich Bahrain whom she has represented well at the international stage.

She is the current world record holder and reigning Olympic gold medalist in the 3000 metres steeplechase, a race most Kenyans would loathe to re-watch after she posted a time of eight minutes 59.75 seconds, to narrowly miss Russian Gulnara Samitova-Galkina's world record of 08:58.16 and beat Kenyan Hyvin Kiyeng Jepkemoi who settled for silver.

After the Rio race, Jebet jetted into Kenya immediately and while speaking to media she said she moved to Bahrain in the year 2012 after landing a sponsorship to study.

“I got a sponsorship there and I am currently taking a degree in animal health,” She said.

She said she felt good to win gold for Bahrain saying she had learnt Kenya’s tactics and she was focused on victory.Prior to Rio, Jebet who trains at Kapsabet had earlier beaten Kiyeng at the Eugene IAAF Diamond league.

“In fact a day before the race in Rio, Kiyeng told me she was not feeling well and I should not pace very fast. I am very happy to have won gold,” She said.

According to her, it was very easy to enter into the national team while competing for another country rather than Kenya.

For her feat, Bahrain gave her a Ksh 52 million cheque which is well over 50 times what Kenyan athletes got for the same achievement.