QUARANTINED: Bush, Bungei out of Afrobasket 2021 Qualifiers that starts today 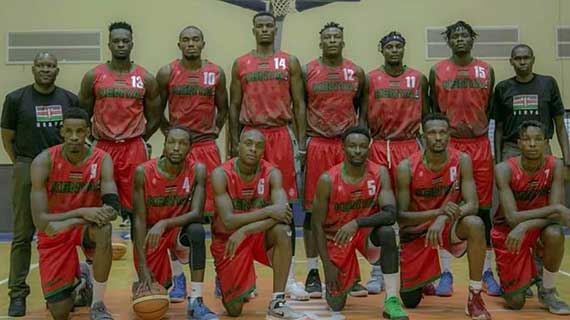 But why Bush had to leave Rwanda for DRC (and not Nairobi) then return to Kigali to link up with Morans is still under wraps at the federation and government.

The fiasco that started with the Kenya Basketball Federation swapping names in the playing unit at the ministry has now escalated and Griffin Ligare has been forced to join Morans in Kigali, Rwanda today.

Reports have emerged from Kigali that the towering forward Tom Bush Wamukota is stuck in Kinsasha, Democratic Republic of Congo in a 14-day isolation after testing positive of Covid-19 is considered unavailable for the national assignment.

But why Bush had to leave Rwanda for DRC (and not Nairobi) then return to Kigali to link up with Morans is still under wraps at the federation and government.

Also, after a mandatory 24-hour quarantine upon arrival (required by the Rwandese federation and FIBA), newbie forward Preston Bungei was not cleared to join the team for the 2021 Afrobasket Qualifiers.

These developments have forced the KBF and the Ministry of Sports to make arrangements for Ligare to fly to join the national basketball team in Kigali today (Wednesday). The playmaker had opted out of the tournament due to work commitments but the national duty came calling once again. The physical education teacher at the International School of Kenya will head straight to quarantine upon arrival.

Previously, head coach Cliff Owuor had named James Mwangi of Ulinzi Warriors to his team but the federation instead submitted Faheem Juma’s name to the ministry for logistics. Attempts to make changes were futile.

Meanwhile, the men’s national basketball team opens their Group ‘B’ Afrobasket 2021 Qualifiers campaign against Senegal today at 6pm at the Kigali Arena.

The fired up Morans must punch above their weight for maximum points when they face the West Africans who are ranked 35th in the FIBA leaderboard, and fourth Africa.

Morans also have a date with Angola ranked second in Africa and 32in the world tomorrow (Thursday) and finish their campaign with Mozambique, rated 93rd by FIBA on Friday. Kenya is placed 122nd in the FIBA rankings.