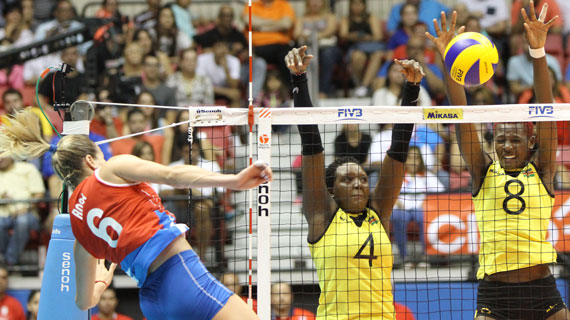 Puerto Rico became the last nation to qualify for the Rio Olympic Games Volleyball competition after a 3-0 (25-08, 25-23,25-15) win over hard fighting Kenya on Sunday night in Sn Juan.

Puerto Rico will join hosts Brazil, China, Serbia, Russia, Argentina, United States, Cameroon, Japan, Italy, Netherlands and South Korea at the Olympic games in Rio Brazil in August; this being their first ever appearance at the Olympic games Volleyball, a fete that was wildly celebrated across the Island.

Having won their opening two matches at the World Olympic qualifiers against Algeria and Colombia, Puerto Rico only needed one set to book the sole ticket to Rio and they did this with ease eclipsing the Kenyan side 25-08.

Kenya were in their best form in the second set recovering well to take a commanding lead with an 8-6 lead by the first technical time out.

Kenya pushed Puerto Rico to 23 ups until poor communication between setter Wacu and Triza Atuka gifted the host nation an easy point that saw them stretch their lead to 2-0 with 25-23 win in the second set.

With a total of twelve points in the match, Kenya’s best scorer of the day Noel Murambi combined well with setter Jane Wacu supported by Evelyne Makuto and Brackcides Khadambi who had 9 and 8 points respectively.

The third set was equally exciting with brilliant play from both ends but Puerto Rico stole the day through Carina Ocasio’s amazing attacks  as Daly Santana won the winning point that dimmed Kenya’s hopes of sneaking away with at least a set from the match.

Speaking after the match, Puerto Rican coach Juan Carlos Nuñez said the credit for the historic Olympic qualification achieved by the women’s volleyball national team belong to all the coaches who preceded him and worked hard to put the team on the right way.

“Today, 22nd of May will go to the history of the sport in Puerto Rico and the credit goes to all the coaches and support personnel who worked in favor of this achievement, this feat,” said Nuñez during the post-game press conference following the victory over Kenya in straight sets.