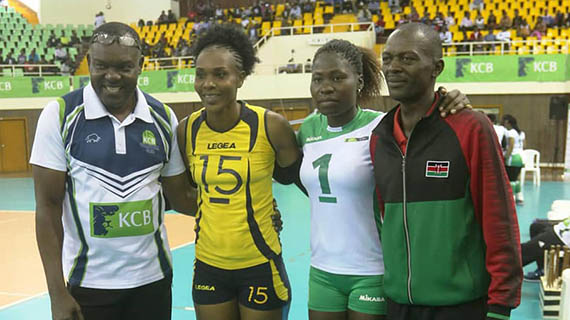 This win secured Prisons Kenya three neat points in their quiver as they begin title defense campaign. In another women's tie, Prisons Nairobi received a 0-3 beating in sets of 17-25, 17-25 and 15-25.

The recently reinforced Kenya Commercial Bank women's volleyball team recorded a statement of intent on Sunday afternoon despite going down to 3-1 champions Prisons Kenya  at the Nyayo National Stadium Gymnasium.

The highly charged and entertaining duel was tight from the start with both sides displaying prowess, power, hunger for victory and no doubt immense talent.

With the moneybags acquiring the services of Prisons Kenya key assets in outside hitter Mercy Moim and middle blocker Edith Wisa early 2020, victory for coach Josp Barasa's charges must have brought them a really awesome feeling.

However, multi-title holders Prisons Kenya who employed the services of veteran aces like captain and middle blocker Braxidice Agala and right attacker Lydia Maiyo showed they got nerves of steel. Coached by Josp Barasa, the wardresses shook off stiff competition from the Ruaraka-based outfit to win the first two sets 24-26 and 26-28 for a 0-2 advantage.

Coach Japheth Munala reorganized his team, bringing in teenage setter Immaculate Nekesa in the place of Rwandese Arnestine Akimanizanye to change tidings for the bankers who snatched the set 25-21 for a 1-2 trail. This, was however short-lived as Prisons Kenya sealed all loopholes observed on their part in the third set. They contained KCB's starring trio of right attacker Sharon Chepchumba, outside hitting duo of Jemima Siangu and Mercy Moim to win the set 16-25 and the game 1-3.

This win secured Prisons Kenya three neat points in their quiver as they begin title defense campaign. In another women's tie, Prisons Nairobi received a 0-3 beating in sets of 17-25, 17-25 and 15-25.

In the men's competition played at the same venue, title holders General Service Unit traded power hits with Equity Bank in a five-set thriller and shared spoils. It was a give and take affair as the Ruaraka-based police outfit ran away with the first set 25-16 and the bankers restored parity to a set each after winning the second period 21-25.

Bouyed by two-time league MVP Cornelius Kiplagat, Naftali Chumba and Kelvin Omuse, GSU chained the bankers to a 25-18 to which the latter responded with a  22-25 deposit leveling sets to 2-2.

The two sides displayed some dramatic see-saw action in the tie-breaking set qhich would have gone either way. Despite left attacker David Neeke and opposite hitter Moses Omondi who's returning from Rwanda's Gisagara VC showing splendid performances, Equity Bank conceded the set 15-13 for a 3-2 loss.