Prison seeking to field Europe based players during Club Championships 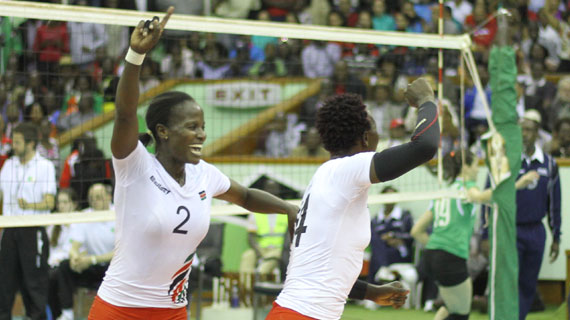 Prison seeking to field Europe based players during Club Championships

Former Africa Champions Kenya Prisons are exploring all options to field their best players during the forthcoming Africa Club Championships to be held in Tunisia between April 20th -30th.

Since losing some of their finest players to Europe including captain Braxcides Khadambi (France) ,setter Jane Wacu (France) ,attackers Evelyn Makuto (France) and Mercy Moim (Finland); Prison has lost the national  title two seasons in a row to local rivals Pipeline and also failed to reclaim their continental glory.

In an interview with michezoafrika.com on Thursday during the team's training camp at Kasarani , Prison team manager David Kilundo hinted that they are following up with FIVB to have their players cleared for the club championship in Tunisia.

"Our key players have been upgrading their technical skills in Europe and we are looking forward to have them back in camp after the end of their sessions at their respective clubs." Kilundo noted.

" Moim is expected to conclude her matches this weekend while Wacu, Khadambi and Makuto are also expected to finish their  sessions in the next few weeks. We hope to have all these players cleared because they will be returning home to join the rest of their team mates and we hope their learning experience in Europe will bring a lot of lessons and value to our campaign especially as we seek to bounce back to African glory." Kilundo added .

Kenya will be represented at the club championships by national champions Kenya Pipeline,Kenya Prisons and Kenya Commercial Bank.

Kenya Pipeline finished in second place last year during the same competition held in Cairo Egypt after losing to host club Al Ahly 3-0 in the final.

The last time Kenya won the club championships was in 2012 in Nairobi when Kenya Prisons defeated home rivals Kenya Pipeline at Kasarani to bag their 5th continental title and 4th in a row.