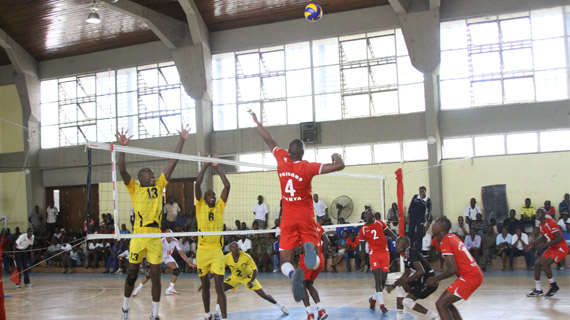 Prison vs GSU at the Makande Hall in Mombasa

The match between defending men volleyball champions General Service Unit and their rivals Kenya Prisons lived up to its pre match  billing as  fans and team members were kept at the edges of their seats throughout the thrilling five sets of action.This happed on day two of the Kenya Volleyball National league playoffs at the Makande Hall in Mombasa.

Pundits had predicted that the winner of this match stands a better chance of lifting the 2016 overall crown and with Prison now earning their second win, they only have KPA on their way to the crown. Prisons will need a simple 3-1 win against hosts KPA on Sunday to lift the 2016 KVF league.

With four points after two matches, GSU who trail Prison by a point will now hope for mathematical miracle in their favour optimistic that KPA will pull Prison to a five set action while they have to defeat Nairobi Water by straight sets to revive their fading hopes of retaining the crown.

In another match also played on Saturday , a star filled Kenya Pipeline sealed their second win of the competition with a 3-0 (25-15, 25-15 and 25-23) tirumph over KCB .Pipeline who beat  Nairobi Water on Friday will next face Kenya Prisons in a title decisive match on Sunday afternoon.