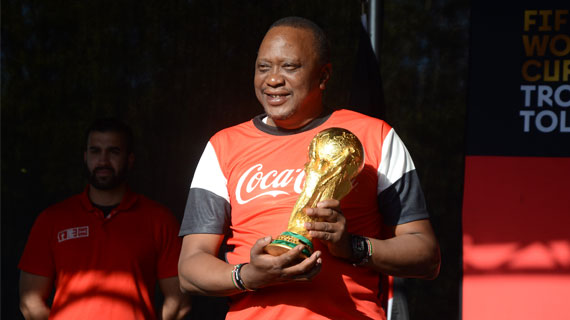 President Uhuru Kenyatta on Monday had the honor of receiving the FIFA World Cup trophy, which is in Kenya as part of a global tour that culminates in the 2018 FIFA World Cup to be played in Russia in June.

A jovial President Uhuru lifted the trophy and  renewed his commitment to the development of sports talents across the country in close collaboration with County governments since sports is a devolved function as per the 2010 constitution.

This is the third time the FIFA World Cup Trophy has docked in Kenya. The trophy made its way in Kenya in 2010 and 2013.

Before the unveiling ceremony, the President enjoyed a game between Bunge FC and Copa Kids FC that ended 1-1.

“For the third time, our country has been honored with the arrival once again of this magnificent trophy in its world tour. On behalf of all Kenyans, we are truly grateful both to Coca-Cola and FIFA for once again picking Kenya as one of the countries during this Cup’s tour across the World,” the President said.

“I want to commit to you that as the national Government, we look forward to working together with you to develop the talents of our young people,” President Kenyatta told the governors who made it to State House for the event.

Members of the public have a chance to view and take photos with the trophy at KICC on Tuesday before it heads for Maputo.

The 6.1 kilogram trophy is made of 18 karat pure solid gold and is valued at above Ksh1 Billion. It was unveiled in 1974 and made by Italian company Stabilimento Artistico Bertoni Company.

Only Presidents and previous winners of the trophy can hold it by hand.