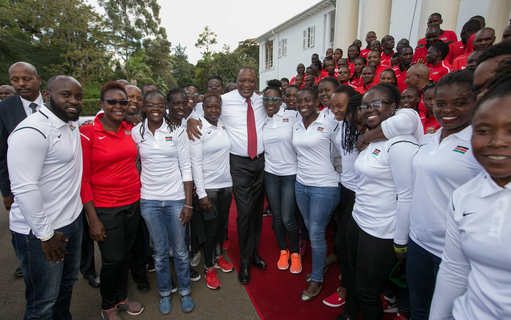 President Uhuru Kenyatta today called on sports federations in the country to style up and ensure that all Kenyan sportsmen and women are well taken care of.

The President said sports federations have a mandate to ensure Kenyan teams are well trained, prepared and catered for financially even as they go out to represent the country in various fields.

“Every time we agree on what needs to be done should be fulfilled. Am perturbed that this has not been happening,” President Kenyatta said.

The President spoke when he handed the national flag to the Kenyan team to Commonwealth Games in Gold Coast, Australia at an event at State House.

Team captain Elijah Manangoi, a paramilitary officer that serves as part of the President’s elite VIP protection unit, received the flag from the President.

The President said the country has an obligation to honour its sportsmen and women who raise the country’s flag high.

He said sports federations, including the Athletic Kenya, Kenya Golf Union, Football Kenya Federation, Kenya Rugby Union, Cricket Kenya and Kenya Hockey, had to style up and ensure that they fulfil their mandate.

“We don’t take for granted that it takes a lot to be where you are. It takes a lot of effort to participate in the variety of international competitions,” said the President.

President Kenyatta told the team that whatever the Government has allocated in terms of allowances and rewards is their entitlement and they should not shy away from demanding them from federations.

“There are things we agreed that need to be done for the rugby team, golf teams and other sportsmen and women, as we demand that they meet our expectations we also should do our part,” said President Kenyatta.

The President directed the Cabinet Secretary of Sports and Heritage Rashid Echesa and other senior ministry officials to ensure that the team is well taken care of before and after the games.

The President wished the team success as they prepare to leave for Gold Coast Australia for the Commonwealth games.

CS Echesa assured Kenyan sportsmen and women of his commitment to uplifting their standards as well as taking care of their wellbeing.

“I know our athletes have been undergoing a lot of frustrations. This will no longer happen under my watch,” he assured the President and the team.

The Commonwealth games will run from April 4th to 15th in Gold Coast, Australia. The Kenyan team of 300 includes Para-athletes team who will participate in various fields.